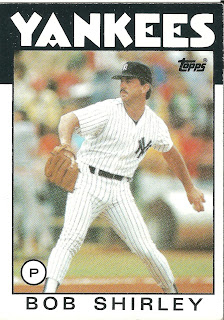 Card thoughts: Shirley is pitching out of the stretch and about to throw his signature curveball.

The player: Shirley was a college phenom at the University of Oklahoma where he played on the Team USA that won the gold medal in 1974 at the Amateur World Series.

Drafted by the Padres, he only pitched a year in the minors before reaching the big leagues in 1977. His out pitch was the curveball, considered at one time one of the best in the National League. But the curve was only effective when he could set it up with his fastball. Any lack of control with the fastball, and Shirley was doomed. Working almost exclusively as a starter for the only time in his career, Shirley won 12 games in his rookie year. Unfortunately, it might have been better if he had gotten more seasoning in the minors. Shirley was third in both losses (18) and walks (100), even though his ERA was a respectable 3.70.

Shirley started in the rotation the following season, but eventually was demoted to the bullpen after giving up 6 runs in 6 innings. This would be Shirley’s career trajectory of the next couple of seasons, as he was a long reliever and spot starter for the Padres until 1981, when he was traded to the Cardinals. He had almost as many decisions in this role had been a full time starter: He lost 16 games (against 11 wins), for instance, in 1979.

Shirley continued in this role for the Cardinals (1981), and the Reds (1982) (went 8-13). Eventually, he arrived in New York, and Shirley would play most of the remainder of his career with the Yankees. He was only starting less than 10 times a year after 1983, but he still generally logged over 100 innings. His best season as a Yankee was the year shown on this card when he had the best ERA of his career, 2.64, and a career low 26 walks in 109 innings.

1987 would Shirley’s last year as a Yankee, and as a major league reliever. Rumor had it that Shirley and #180 Don Mattingly were horsing around in the locker room, when Donnie Ballgame slipped a disk in his chronically sore back, putting him on the DL. Whether it was true or not, George Steinbrenner wasn’t the type to weigh the evidence and Shirley was booted from the team soon afterwards. He latched on the Royals, but was horrible 7 innings of work (14.73) and never played again in the majors, finishing his pro career in 1988 with Syracuse, the Blue Jays AAA club. 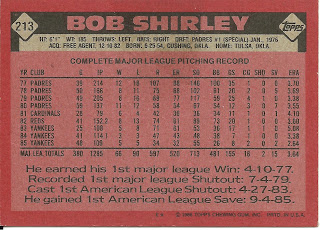 Rear guard: I don't think that Shirley really recalls his first American League save, which came about 5 years after his first National League one. His first win, however, was a gem. He would have had a complete game shutout against the Reds if second baseman Mike Champion hadn't booted a ball, allowing George Foster to score with two outs in the ninth. Seemingly rattled, Shirley loaded the bases, and was taken out of the game. He was charged with 4 unearned runs after #1 Pete Rose cleared the bases off the next pitcher with a double.

This date in baseball history: #200 Mike Schmidt made Astros fans very happy (and a little drunk) after he struck out in the fifth inning of game in 1976. Fans were promised a free beer if he struck out (one of 149 trikeouts that year).

I remember this card vividly from my childhood, but only because I accepted it grudgingly. I was headed to the Stadium with my dad for a game in 1986 and expected to see Doug Drabek, then a hot rookie, pitch. Shirley spot started instead, got his butt kicked, and to add insult to injury, the Yanks got shut out by Neil Allen of the White Sox. Tough day at the ball park. Bob Shirley was on my childhood s***list for a good long time. Really fun blog!