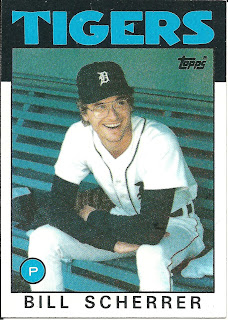 Card thoughts: Someone is having a geeky good time riding the pines.

The player: As a rookie for the Reds in 1983, Scherrer had what would turn out to be his best season. In 73 games in relief (4th in the league), he pitched 92 innings and had 10 saves along with a 2.74 ERA. Perhaps overworked at such a young age, Scherrer regressed to a 4.99 ERA the next year before being traded to the Tigers for their stretch run (the Reds got an insignificant pitcher, Carl Willis, in return).

He perked up with the Tigers, winning a game and having a 1.99 ERA over 19 relief innings. Scherrer did not appear in the ALCS, but pitched 3 games in the World Series, giving up 1 run.

This would be the highlight of his Tigers career, as the next two campaigns saw Scherrer struggle mightily with his control as he became an unreliable bullpen arm. In 1987, he signed back with his original club, the Reds, in hopes of recapturing his earlier magic. He pitched well in the minors, but not so great in the majors. The next season saw Scherrer join, and be released by, 4 organizations: The Phillies, Giants, Cubs, and Orioles. He reached the majors for the last time with both the Orioles and Phillies--he was marginally better with the Phillies.

Scherrer was not done hopping organizations, as he played with both the Mets and the Rangers AAA team in his last pro season.

He was more effective in his post playing career as a scout with the Marlins, Reds, and White Sox. Scherrer is now the assistant to White Sox GM Kenny Williams. 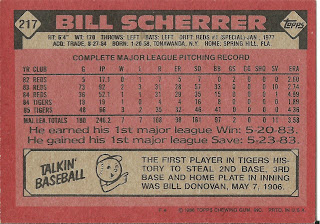 Rear guard: Bill Scherrer got the Cubs' Larry Bowa to fly out to left, and Bill Buckner to ground back to the mound as he got the win in relief of #108 Ted Power.

This date in baseball history: Mario Soto is suspended after attacking Cubs third base coach Don Zimmer in an altercation related to a Ron Cey foul ball being called a home run (later reversed) in 1984.
Posted by Jets Break Jaws at 10:26 PM