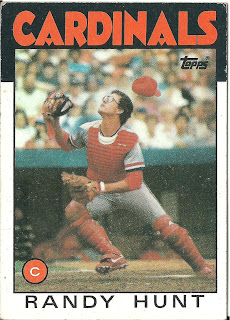 Card thoughts: This is my favorite card in the set. The photo has it all: The exciting action shot of a catcher (so common in this set); the hat falling off; the glasses, somehow snug against the catchers face; the dust swirling up around home plate. A classic. Even better, this is Randy Hunt’s only card. He never appeared in a Fleer or Donruss set. Which shows how bad Topps was at picking rookies to feature back then.

The player: Who was Randy Hunt? Definitely not as exciting of a player as this card would indicate. Apart from a stellar season at single-A Springfield where he hit 15 homers and drove in 79 (and made the all decade list for the Springfield Cardinals), his minor league career was undistinguished.

He hit the majors in June of the year shown by this card, replacing the injured catcher Darrell Porter. After spending six weeks with the club, he was sent back down to AAA. Unfortunately, while Hunt was gone, Tom Pagnozzi, had been promoted from AA. Not wanting return the superior prospect to AA, Hunt was instead loaned to the Texas Rangers organization. He came back to the Cardinals in September to give the regular catchers some rest at the end of the season.

With plenty of good young catchers in the system, Hunt was deemed expendable by the Cards, and he was sold the Expos in February of the following season. It was with this team that he would play his last 20 games, hitting .208. In his brief 2 year career, Hunt batted .194 with 2 home runs in 74 at bats. 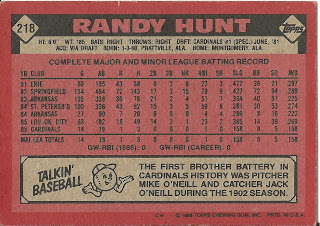 Rear guard: There were actually two more O'Neill brothers who played baseball: Steve and Jim. Jack hit only .141 as the backup catcher for the Cardinals in 1902, and .196 in a 5 year career. Brother Mike was more successful. He pitched for 4 seasons, and although he had a losing record, had a decent (for the time) career ERA of 2.73. In 1902, he went 16-15. Mike actually was a better hitter than Jack, and he sometimes played the outfield when he wasn't pitching. His career average was .255.


This date in baseball history: Cal Ripken's first of 2,131 consecutive games is played in 1982 at third base.
Posted by Jets Break Jaws at 7:29 PM

I remember being fascinated by this card -- who was Randy Hunt? Why did he get such a fantastic card? It was the most mysterious card in the set.