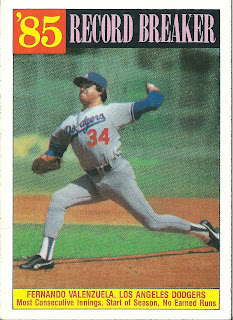 Card thoughts: They really should have shown Fernando in his famous "eyes in the sky" portion of his delivery.

The record:  The record lasted until Valenzuela's fifth start. He actually gave up 4 unearned runs in that span, which led to losses on second day of the season to the Astros and on April 23rd to the Giants. 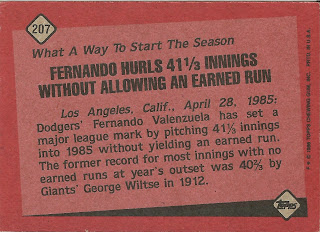 Rear guard: You would think after over 70 years, another pitcher would have broken this record. George Wiltsie, better known as "Hooks" only pitched 134 innings that year, and his ERA was a fairly high for the time at 3.14. This record is so obscure, I can't find out if it has been broken or not.

This date in baseball history: A new balk rule instituted in 1950 plays havoc with Yankees starter Vic Raschi. Unable to come to the required full stop, he balks four times in a game. Despite that, he gets the win.
Posted by Jets Break Jaws at 10:41 PM

Brings up a good point.

Does he have an eyes to the sky card?

I would look but I have few of his cards.

nice posting.. thanks for sharing.

How much is the 85 Record Breaker worth ?

How much is the 85 Record Breaker worth ?