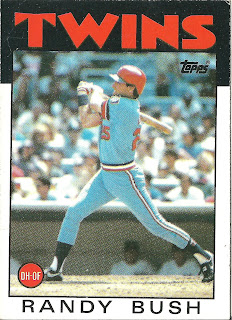 The player: Randy Bush was drafted out of the University of New Orleans by the Twins in 1979. This fact is significant, as this background would help after his playing career was over.

For much of his career, Bush was the left handed part of a platoon for the Twins. Initially, he started out as the left handed half of a designated hitter platoon with Mickey Hatcher frequently being the right handed counterpart. In 1983, his first season as a regular, Bush would have what would be a typical season for him: Around 350 at bats; 10 home runs, and 50 runs batted in, with the batting average fluctuating. He would also get about 20 pinch hit at bats. Bush would be moved to left field starting the season shown on this card; two years later, in 1988, he would be moved to right.

After retiring, Bush coached for awhile at his alma mater. He is currently an assistant to the Cubs general manager, Jed Hoyer, the only assistant GM to survive the firing of former GM Jim Hendry (Bush was the interim general manager at the end of 2011), which speaks to the respect he has in the organization. If you ever wondered what the “assistant to the GM” does (I always thought he was the general manager’s drinking buddy), Bush lays out his responsibilities here. 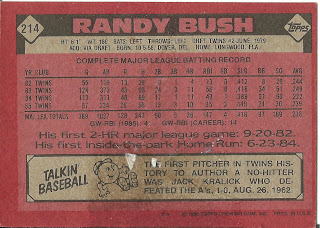 Rear guard: Oh the dreaded gum stain! In addition, some paper remained stuck to the card. Luckily, the Bush card isn't valuable at all.

Bush's inside the park home run came against the White Sox, and no doubt owed a lot to the quirks of the Metrodome (artificial turf, weird ground rules), since he didn't have much speed.

Jack Kralick almost got a perfect game in that start, but with two outs in the ninth, he walked George Alusik. For the season, Kralick was a pedestrian 12-11 with a 3.86 ERA. Here's his card from his no-hit season.


This date in baseball history: Tommy McCraw hits a 200 foot home run after 3 Indians players collide trying to field his ball in short right field in 1971.
Posted by Jets Break Jaws at 10:00 AM