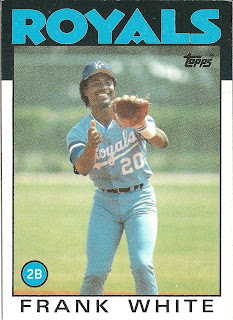 Card thoughts: White looks positively jolly catching this throw in spring training. Either he knows the camera is on him, or his teammate just had a pratfall.

The player: White started out as a defensive whiz every bit as respected as Ozzie Smith. He was considered the best defensive American second baseman in the late 70s and early 80s. White also acted as a kind of auxiliary coach, positioning infielders and even outfielders. Only later would he become a dangerous hitter.

George Brett is considered the icon of the Royals franchise, but Frank White--the only other player whose number was retired by the Royals and who has a statue in front of the stadium--would be a close second. Growing up not far from the stadium, White actually worked on the construction crew that built Kauffman Stadium, which would be his home for the 18 seasons.

Initially a backup to popular second baseman Cookie Rojas, White took over the second base job for good in 1975. Up until 1980, he was known as a slick fielder who contributed little on offense, mainly hitting singles and driving in about 50 runs. White won gold gloves from 1977-1982, and made the all star team on the strength of his glove in 1978 and 1979 (as a starter in 1979).

White began blossoming into an offense force in the 1980 ALCS, where he won MVP honors by hitting .545 in the three game sweep of the Yankees, propelling the Royals to the World Series for the first time. In 1982, White began a stretch of 6 straight seasons where he slugged over .400, a feat he’d only accomplished once in the 70s. In the 1985 World Series, which was played without a designated hitter, he displaced regular designated hitter Hal McRae as the cleanup hitter, and contributed a home run and 6 runs batted in to the winning cause.

The next season was one of White’s best, as he set or tied career highs in home runs (22) and runs batted in (84). He made his last all star game that season, along with winning his second to last gold glove.

White retired in 1990, reaching 2,000 hits and coming in 38th all time in defensive WAR. After his retirement, White held a variety of jobs with the Royals, including coach and broadcaster. But despite being an icon, the new Royals ownership came to regard White with disdain. They considered him to think as highly of his status as George Brett, despite not having hall of fame numbers. Eventually, these tensions came to head, and White was fired this past offseason as the Royals broadcaster.

White has since renounced all ties to the franchise that he was associated with for so many years. In order to stay employed in his hometown, he took a job with the independent league Kansas City T-Bones. 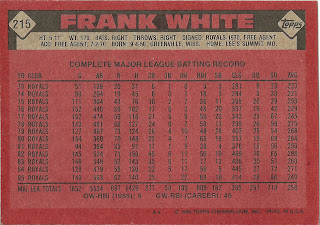 This date in baseball history: Cliff Johnson ties a record by hitting his 18th career pinch homer in 1983.
Posted by Jets Break Jaws at 7:56 PM