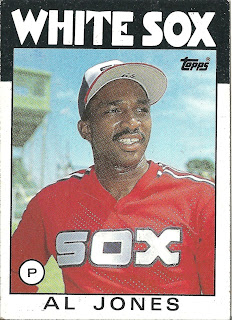 Card thoughts: Obvious spring training photo, which is almost identical to one on his 1985 Topps Card. If you like to play detective, note that Jones cap on the previous card had his last name written under the bill. In this case, it's his number. Conclusion: Jones was considered more likely to make the team out of spring training the previous season.

The player: Al Jones is one of those players I have absolutely no recollection of, and he left only a tiny mark on the game of baseball.

Jones arrival in the majors was a bit of a fluke. He was drafted out of Alcorn State University, a small land grant university in Mississippi known more for producing pro football players (Jones is still the only baseball player ever drafted from the school). Despite his obscure background, Jones got the Sox’s attention by saving 22 games for their low-A affiliate in Appleton in 1983. He also went 11-1 and had an almost non-existent 0.93 ERA.

Jones was rewarded by jumping all the way from A ball up to the majors at the end of the season. He pitched 2 1/3 innings and gave up 1 earned run. The next season, Jones’ saw his most extensive in the big leagues. For a time, he was the White Sox closer and out of the 20 games he pitched that season, he finished 14 of them and got 5 saves . The year shown on this card, Jones broke with the club and was pitching well, with a 1.50 ERA, before being injured.

Jones never made it back to the majors, and he spent time in the Brewers organization before pitching and coaching in the Chinese Professional Baseball League at some unknown date. 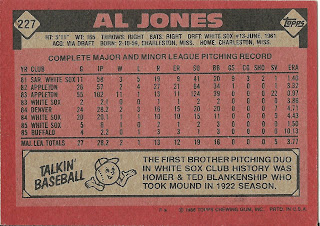 Rear guard: Homer Blankenship won only one game in his career, and he only pitched 13 innings the season he appeared with his brother. Ted was a little better, having been a rookie in 1922 like his brother. Ted  had a 77-79 record over 9 years, with his best year being 1925 when he went 17-8 with a 3.03 ERA.

This date in baseball history: In his third major league at bat, Bobby Bonds hits a grand slam against the Dodgers in 1968.
Posted by Jets Break Jaws at 10:18 PM

Al Jones was not the only player drafted from Alcorn doing these comments,also Stanley Barker was drafted that yr in 1981 with Al,Barker went in the 5rd to Detroit tigers,Also Alcorn had players drafted in the 70tys by MLB also