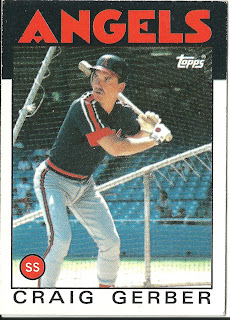 Card thoughts: Another picture of an Angel in the batting cage. No doubt taken at the same time as this picture of #127 Jack Howell and #190 George Hendrick. This is Gerber’s only base set Topps card. Fleer also issued a card of him this year.

The player: Wow, this is going to be the dullest post of the set. Gerber only played this season in the bigs. He generally was the late inning defensive replacement for poor hitting youngster Dick Schofield. In his brief 65 game career, Gerber only got 97 plate appearances, and hit for no power, but a decent batting average.

He did have really extraordinary range at short, however, which is why he made the big leagues. It certainly wasn’t his minor league offensive stats, where he hit .251 with a .312 slugging percentage over 6 seasons.

It may be a coincidence, but for a time in the 90s there was a staffer in the Angels marketing department named Craig Gerber. Anyone know if this the same guy? 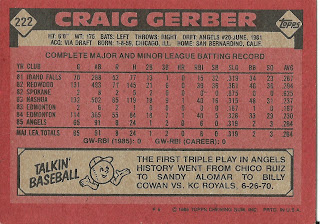 Rear guard: Chico Ruiz (the third baseman) snagged Amos Otis' ball near third. He stepped on third, fired to Alomar at second, who then threw to Cowan at first. Here's are Ruiz', Alomar's, and Cowan's cards from that season. Only Alomar was a starting infielder.

This date in baseball history: The last game is played today before the 1981 baseball strike.
Posted by Jets Break Jaws at 8:57 PM