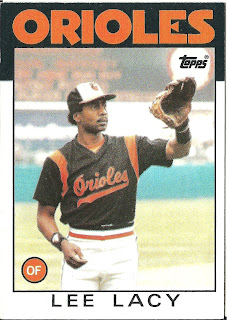 Card thoughts: This is Lacy’s first card as an Oriole, and it’s another shot of an Orioles player in an awful Star Wars style warm up shirt (at Yankee Stadium). Warning: There will be more.

The player: Given his hitting ability, it’s surprising Lee Lacy didn’t become a regular until his final playing years. But perhaps the wise decision to platoon Lacy (he destroyed left-handed pitching) and using him as a pinch hitter actually helped him, as it didn’t overexpose him.

After hitting over .300 in three out four minor league seasons, Lacy arrived to the Dodgers mid way through the 1972 season and took the second base job away from struggling Jim Lefevre. Lacy hit only .259 with a weak .625 OPS, which was unfortunate for him because a young #125 Davey Lopes made his debut at the end of that season.

Lopes beat Lacy out for the starting second base job in 1973, and his average plummeted to .207 as he was barely used at second. Due to his poor showing in ’73, the Dodgers were understandably wary of using him too much in 1974. But even though he got only 80 or so at bats, mostly as a pinch hitter, he raised his average to .282. That, and his ability to play all three outfield and most of the infield positions, convinced the Dodgers to increase his playing time in 1975. Usually starting when a left-hander was pitching, Lacy hit over .300 for the first time, and upped his power totals.

Because of this improvement, Lacy became attractive to other teams. The Braves snatched him, along with other good young players blocked by the Dodgers strong starting 8 (Tom Paciorek and #118 Jerry Royster) and aging superstar Jim Wynn for Dusty Baker and Ed Goodson. But the Dodgers, missing Lacy’s potent bat off the bench, got him back in June for disgruntled reliever Mike Marshall.

The next year was a typical Lacy campaign, as he hit for a decent average, played all over the field, and exhibited hardly any power. After not seeing much action in the NLCS, he tore up the Yankees in the 1977 World Series. Lacy hit .429 (the highest on the team) in a losing cause.

1978 was Lacy’s best year to date. He started playing the outfield more, and he hit for a good average, but the surprise was his career high 13 home runs and .518 slugging percentage. Lacy set a record that season, since tied, where he hit home runs in three consecutive pinch hit at bats. As the Dodgers were playing the Yankees again in the World Series that year, and as this was the year the DH was in effect in the World Series (the DH used to be used alternating years), manager Tommy Lasorda started Lacy in the 4 games in the series. He couldn’t repeat his previous success, however and hit only .143.

Lacy hit the “re-entry” draft the following season. The re-entry draft was a complicated system that was used at the start of the free agent system. Any player that could not come to terms with his club was made available to the league at large. If at least 13 teams claimed the player, he was a free agent, but could only negotiate with the teams that had drafted him. Lacy signed with the Pirates, which was a good choice (although not for his personal life—more on that later), as he got his only World Series ring with them in 1979.

1980 was a transformative year for Lacy, in that he became a threat the steal bases for the first time in his career (he was 32 at the time). Perhaps it was playing the majority of his games on artificial surface, but Lacy began to garner double digits in steals every year for the next five years he played on the Pirates. The turf also helped his batting stroke. Lacy hit over .300 every year, except the strike shortened 1981 season, he played with the Bucs. He had a career high in steals with 40 in 1982, but his best overall season came at age 36. He hit 12 home runs, drove in a career high 70 runs, and got into 138 games, despite being the team’s fourth outfielder.

Perhaps it was the cocaine that was responsible for Lacy’s late career energy surge. Lacy was part of the big cocaine trials in 1985, and was one of many current and former Pirates who admitted buying and using the drug, even during games. Initially, he was recommended to be suspended for a year, but the sentence was reduced to community service.

The Orioles signed Lacy in 1985 and, despite his age (37), installed him right field to make him a regular for the first time since his rookie season (and even then, he only started 60 games at second). He didn’t disappoint with the Orioles, posting solid .293 average with 9 home runs and 49 runs batted in. In 1986, a much better power year for the league as a whole, Lacy was a regular once again and had similar numvers, although his average dropped just below .290 for the first time since 1981.

But age finally caught up with ageless Lee Lacy in 1987, and retired at the end of the season. In his last at bat, Lacy pinch hit for DH Jim Dwyer and flew out to right.

Lacy is the father of WNBA player Jennifer Lacy. 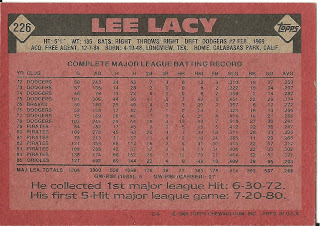 Rear guard: The stats were squeezed so some facts could be inserted. Lacy's first hit was in his first major league game and came off Giants pitcher Ron Bryant.