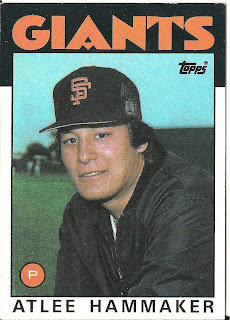 Card thoughts: Either there is a lot f pitching rosin on Hammaker's cap, or a regulation cap wasn't available for the shoot so he sent a kid out to buy a cap at the souvenir stand.

The player: Hammaker, of both German and Japanese descent, was a well traveled Army brat before he accepted a basketball scholarship to obscure university East Tennessee state. While there, he was encouraged to take up baseball. This was a wise choice, as the Royals selected Hammaker in the first round of the 1979 draft. After an okay minor league career, he reached the majors in 1981.

Hammaker had a three-quarters delivery, and threw hard for a left-hander: His "tailing" fastball (nowadays called a "cutter") sat at 90 mph. He also threw a good slider, a curve, and a sometimes effective straight change. At the plate, he was terrible. Hammaker's career average was .118.

A 1-3 record with a 5.54 cast doubt in the Royals mind whether Hammaker would perform well for them in the future. They shipped him to the Giants in a trade, along with #41 Brad Wellman and some other players for Vida Blue. Hammaker would have his best seasons with the Giants. After a 12-8 mark in 1982, he won the ERA crown the next season with a 2.25 ERA, despite a barely above .500 mark at 10-9. At 172 innings, he was barely over the minimum innings needed to qualify for the lead.

Hammaker made the all star team that year, but pitched one of the most disastrous innings even in that game. In 2/3 of an inning, he gave up 7 runs, including a grand slam to #55 Fred Lynn, the first in all star game history. He would never be back.

At the end of the 1983 season, Hammaker was put on the shelf with tendonitis. The problem recurred the next year, and he also injured his shoulder. He only got into 6 games, but still had a fine 2.18 ERA.

Hammaker regressed to 5-12 during the season represented by this card. Hammaker appeared in spring training the next year suffering from a mysterious ailment contracted on a Carribean cruise in the off-season. The sickness sapped his strength as his weight dropped and his body fat increased. He missed the entire 1986 season to combat the illness.

After his return, Hammaker’s days as budding star ended. He generally was a 6-7 inning starter in his spot starts, but was also used in long relief. Hammaker fulfilled this role in the 1987 NLCS, where he gave up a three-run home run to light hitting Cardinal utility man Jose Oquendo to put the deciding Game 7 out of reach for the Giants.

1988 was the last year Hammaker was able to pitch over 100 innings, and he went 9-9 in that campaign with 3 complete games and 5 saves. Subsequent years saw his innings pitched diminish every year as he was wracked with various injuries. Hammaker was released by the Giants in 1990 and was signed by the Padres, with whom he pitched 24 innings over 1 ½ seasons with a 6.75 ERA. By this point, Hammaker had been on the disabled list 12 times since the start of his pro career. When he had trouble staying healthy in 1991, he was released by the Padres, and was out of baseball for 2 seasons.

The White Sox signed him 1992 originally, but he was released in spring training after, you guessed it, another injury, this time to his elbow. They gave him another chance a year later, and this time, after pitching well in the minors, he made it back to the big leagues, but for only 1 1/3 innings. In 1995, Hammaker had a 12.71 ERA over 6 1/3 innings, which led to his final release. 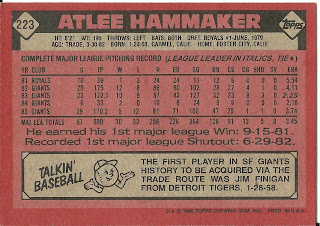 Rear guard: Hammaker beat the Angels for his first win by going 7 innings and giving up 1 run. Unfortunately, he walked 5 while striking out only 2.


Since the Giants had been around in New York since the San Francisco Giants is that significant. At any rate, Finigan had a couple of good seasons as the starting third baseman on both the Philadelphia and Kansas City A's in the mid-50s (he came in second to pitcher Bob Grim in rookie of the year balloting in 1954), but he only played 23 games as a reserve infielder for the Giants. Topps airbrushed his 1959 card to pretend he was on the Orioles (he'd be sent there after the season). His 1958 card shows him as a Giant, although he's shown in profile and I'm pretty sure that's a KCA on his hat.

Gail Harris, one of the guys he was traded for, had a really good year as the Tigers first baseman a year after the trade; Ozzie Virgil (Sr.), the other player involved in the trade, was a serviceable backup third baseman, but was injured 1/3 of the time he was with the Tigers.
Posted by Jets Break Jaws at 11:37 PM

Poor guy was never the same after that disastrous All Star game appearance.