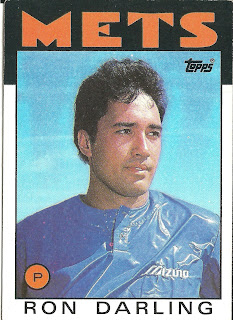 Card thoughts: This is a terrible picture. It looks like one of those cards Topps issued back in the 50s for players who had changed teams in the off season where they didn’t have time to airbrush a new hat. There is absolutely no logo anywhere indicating that Darling plays for the Mets. I mean, the Topps photographers this year were obviously at Shea a bunch. Couldn’t they get an in action shot of Darling in uniform? Or perhaps Topps was trying to highlight his good looks.

The player: Darling is a smart guy. He speaks both French and Chinese fluently, as his parents were immigrants from China and Canada, respectively. Darling also spent his formative years attending exclusive East Coast prep schools. This probably paved his way into Yale, although he didn’t graduate as he was drafted by the Rangers in his junior year.

Darling was a mediocre minor leaguer. After playing only one season at AA in the Rangers organization, he was traded with Walt Terrell to the Mets for Lee Mazzilli. He wasn’t much better at AAA Tidewater the next two seasons, where he placed in the top 5 in walks issued both seasons. Despite this, Darling was promoted to the Mets at the end of 1983 and spent the next 13 years exclusively in the majors, where he threw a curve, slider, change, split finger fastball, and a four-seam fastball.

Despite still having a problem with walks (leading the league with 114 issued the season shown by this card), Darling was a consistent winner with the Mets. He had seasons of 12, 16, 15, 12, 17, and 14 wins through the 1989 season. Highlights from this productive run include making his only all star team in 1985; being third in ERA with 2.86 in 1986; pitching 14 innings in the 1986 World Series without giving up an earned run; and, um, being on the cover of GQ magazine.

After another good season in 1989, Darling pitched poorly for the rest of his Mets career. He would pitch scoreless ball in one start, and then get blown out in the others. Darling was finally traded to the Expos in 1991 for Tim Burke. He had three more bad starts for the Expos until they traded him for the second time in 1991, this time to the Oakland A’s. This revived Darling’s career for a brief moment. In 1992, Darling had a season similar to the ones he had as a young Met, going 15-10 with a 3.66 ERA. Darling lost his only post-season start that year, although he only gave up 2 runs in 6 innings against the Blue Jays in the ALCS.

The A’s, perhaps thinking that Darling had regained his star pitching form, signed him to a multi-year contract after the season. This was a mistake. It turned out, rather than auguring good things to come, Darling’s 1992 season was his last hurrah. In his last three seasons with the A’s, he never had an ERA under 4, and never won more than he lost, although Darling could have had one last good year in 1994, as he had a great July that propelled him to double digits in wins and led the league in games started. But the strike ended the season in August. Darling was released by the A’s on his 35th birthday in 1995.

Darling, always a photogenic cat, has been heavily involved in television while he was a player, but especially since he retired, working as a studio baseball analyst, a color commentator, bank pitchman, and bit part actor. He has also written an awesome article about what it is like as an athlete when you know your time in the big leagues is up. Definitely worth a read. 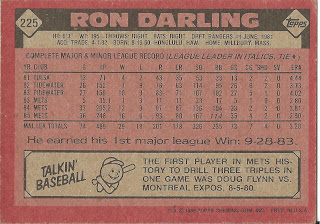 Rear guard: Darling's first win came against the Pirates, and was a complete game. He gave up 7 hits, and 2 runs. The losing pitcher was #161 Lee Tunnell.

Doug Flynn is actually a legendarily powerless hitter, who only got regular playing time because nobody could hit from in the mid to late 70s (and the early 80s, for that matter). In 1980, when he hit those triples, he had a .312 slugging percentage for the year. .312! (At least it was above average for Flynn, his career slugging percentage was .294). Flynn was in the top ten in triples that year, however, so he had good speed. Here's his card from that year.

This date in baseball history: Jim Bunning, who later became a senator (and undeserving Hall of Fame inductee), tosses a perfect game against the Mets in 1964. This is significant, as Bunning is the first to throw a no-hitter in both leagues.
Posted by Jets Break Jaws at 6:56 PM