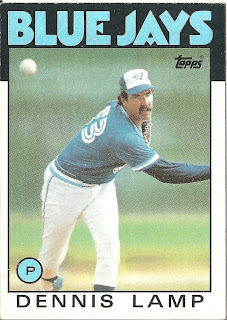 Card thoughts: Lamp’s trademark mustache is in evidence here, but not his glasses. On his early cards, Lamp was always bespectacled. I was always fascinated with card pictures where the ball seemed like it was coming right at the camera.

The player: Lamp was a pitcher reliant on his sinker . . . almost too much at times, as he also had a good curve and slider. Which makes it astonishing that his success came with a team that played a majority of its games on artificial turf. He was also valuable because, especially in the middle of his career, he could pitch in any role: starter, middle relief, long relief, and closer.

Lamp was drafted by the Cubs, and made his debut with them in 1977. He was mainly a starter for the club, and not an especially effective one. He only had one winning season in the 4 years he pitched for them, including records of 7-15, 11-10, and 10-14. Here’s a game where Lamp was getting destroyed by the Phillies in the first inning of a game in 1979. To add insult to injury, he led the league in earned runs given up in 1980, mostly due to his wildness (8th in walks, 3rd in wild pitches).

The Cubs had enough, and completed a rare trade with the White Sox, getting pitcher Ken Kravec in exchange. Lamp turned his career around with the Sox. They wisely made him a swing man, and he responded with a 2.41 ERA in 1981. Lamp was even better the next year, winning 11 games, splitting his time about equally between starting and relieving. In 1983, Lamp was almost exclusively used as a reliever, which would be his role for the rest of his career. He went 7-7 during the season, and gave up no runs over 3 innings in the ALCS.

Lamp’s next stop was with the Blue Jays, where he would have the best of years of his career. He came within 1 win in 1984 of setting the record for most consecutive relief wins in a season. And in the year shown on this card, Lamp did not lose a game, going an outstanding 11-0 with 3.32 ERA, and he kept up his hot pitching the ALCS, where he once again gave up no runs over 3 appearances.

After another season with the Jays, Lamp would spend one season with the A’s (where he was ineffective) and then to Red Sox for four seasons, with the 1989 season as a highlight. Lamp had a career low 2.32 ERA and 1.095 WHIP that season.

Lamp would end his career in 1992 with the Pirates. Since retiring, Lamp has a worked a variety of jobs not usually associated with an ex-player including as a temporary worker and a salesman on commission at Nordstrom. He currently mans a seafood counter at a grocery store, and says he loves his job. In case you are wondering, Lamp isn’t broke. He just likes working. 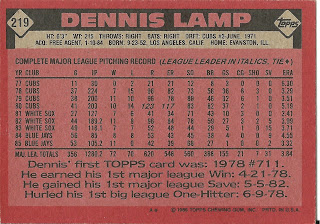 Rear guard: Wow! Lamp's first card is the only one where he is sans mustache. Maybe there was a rule in the Cubs minor league system against facial hair. Out of the other three pitchers he shares his card with, Roy Thomas has a card in this set, so he lasted awhile; Cardell Camper, besides being an awesome name, only won 1 game and pitched 3 games and is now dead; and Craig Mitchell was the first overall pick in the 1973 draft, yet he only pitched 5 games over a 3 year career and ended up with a 7.82 ERA.

This date in baseball history: The famous poem "Casey at the Bat" was published in the San Francisco Examiner under a pseudonym in 1888 because the author, Ernest Thayer, a humor columnist for the paper, was ashamed at the poor versification.
Posted by Jets Break Jaws at 10:12 PM