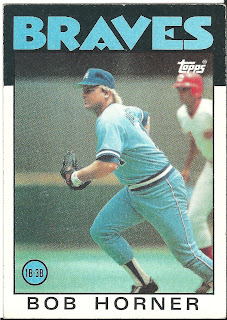 Card thoughts: Fair or not, the first thing I think of when I think of Bob Horner is "fat." The last thing I think of is his defense, which suffered at third so much from his immobility and lack of range, that you can see he had started transitioning to first by this season. Despite this, Topps chose to show Horner lumbering in to pick up a bunt.

The player: Horner was a dead pull power hitter, but despite hitting over 20 home runs five times, he never drove in more than 100. For some reason, etched in my memory, is waking up one morning in the summer of '86, laying on the living room floor with the sports page, as usual, and seeing that Horner had hit 4 home runs in a game, which in that power challenged era seemed absolutely incredible to me.

Horner was drafted first overall by the Braves in 1978, and went straight into the majors. In fact, the only minor league team he played for was in Japan, at the end of his career. The move to bring Horner to the majors immediately was a wise one, as he hit 23 home runs in only 89 games, winning Rookie of the Year honors. The next two seasons he was equally effective, hittng 33 and 35 home runs, reespectively, despite missing time with chronic shoulder and leg injuries.

Despite these hitting feats, Horner only made one all star team, in one of his best seasons in 1982. He was in the top 10 in home runs (32), runs batted in (97), and slugging (.501). This was also last year Horner was a regular third baseman. His great season did not continue into the NLCS: he only hit .091 against the Cardinals.

Injuries again took their toll on Horner for the 1983 season. Despite having a good season--hitting 20 home runs, driving in 63, and hitting .303—he broke his wrist on slide into second base, missing the last 6 weeks of the season. He re-injured the wrist the following season, leading to a “lost” 1984 campaign, where he only got into 32 games.

Horner was back to being a feared slugger in the season shown on this card and the one following. He also switched full time to first base after the arrival of Ken Oberkfell. Despite hitting 27 home runs each of the last two years of his Braves career, he was not offered a contract by any team after the 1986 season as a result of collusion by the owners. He was forced to ply his trade in Japan. Unlike many star players who find themselves in Japan, Horner was still in the prime of his career. He hit 31 home runs and drove in 73 for the Yakult Swallows in 1987.

Returning stateside in 1988, Horner finished up as the Cardinals starting first baseman for the first half of the season, until a shoulder injury shelved him for the remainder of the year. That was it for Horner as he retired at age 30, his career shortened by severe and chronic injuries to his wrist and shoulder. 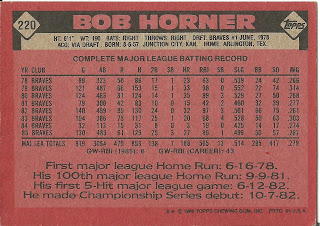 Rear guard: Although 100 home runs is nothing to sneeze at many, many players, including some that were never power threats, have reached this mark. For what it is worth, Horner's 100th home run was in a game of dueling hall of famers (Phil Niekro and #100 Nolan Ryan). His three run home run off the Astros' starter Ryan drove in #107 Rafael Ramirez and #149 Brett Butler.

This date in baseball history: Hah! Bob Horner was selected on this date in 1978 as the #1 overall pick in the nation. Happy draft day, Horner!
Posted by Jets Break Jaws at 3:06 PM

Bob grew up in my hometown (Glendale, AZ). He also went to Arizona State University. We really rooted for him when he came up in 1978. It's too bad he wasn't able to keep up the early success he had, but there is a soft spot in my heart for him.

Yeah, I think the weight issues may have made his injuries harder to get over. It is also pretty unfair that collusion screwed him when he should have been in the prime of his career.