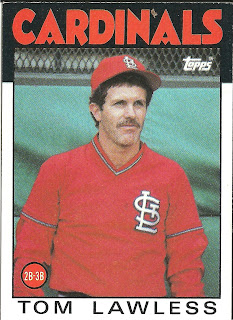 The player: A player like Tom Lawless doesn’t really exist in the majors today. Let me rephrase that: A player like Tom Lawless would never be on a major league team all year long with as little ability as he showed with the bat. Despite a career .207 batting average, and only twice getting more than 100 plate appearances in a season, Lawless stuck on a major league roster for more than half of his career.

The reason he was able to stick almost exclusively as a late inning replacement and pinch runner is twofold:

1)    The highest paid players were not paid as much relative to today. This allowed a club to pay Lawless above the league minimum, because of his years of service. Today, when a few of a team’s top players can command over 1/3 of the total team salary, team’s can’t afford a player like Lawless. They just move these types of players up and down from the minors for a few years, then get new ones.
2)   The mediocre, light (or really no-hitting) middle infielder whose only value in the majors is his glove (and maybe his legs) has been supplanted on the roster by the mediocre, control challenged middle reliever whose only value to the team is his ability to pitch frequently.

On to Lawless. Despite being an awful hitter, he did have a somewhat eventful career. Breaking in with the Reds in 1982, after three straight seasons in the minors where stole over 60 bases, Lawless stole 16 bases, despite being on base only 44 times.

Despite this early promise, the Reds didn’t much need a second baseman who rarely hit a ball that reached the outfield fence. With incumbent Ron Oester starting every game but two in 1983, Lawless was buried in the minors the entire year, where he managed to show some power for the first time and hit .279.

Back up in 1984 as the Reds’ principal backup young third baseman Nick Esasky and second baseman Ron Oester, Lawless was having a career year, hitting .250 when he was traded to the Expos for none other than all-time hit king #1 Pete Rose. This was would be the only player in history Rose was traded for. He rewarded the Expos by hitting .176 in 11 games at the end of the ’84 season, leading to his trade to the Cardinals.

Lawless would have his most productive (relatively speaking . . .) years as a member of the St Louis Cardinals from 1985-1988. His role was to provide a late inning rest for perpetually ailing starting third baseman Terry Pendleton. Each year, Lawless would get about 10 hits and drive in runs in the single-digit range. But Lawless did have a post season to remember in 1987. Pendleton was unable to field, or swing the bat from the right side, due a rib-cage injury suffered in the NLCS, which limited him to DH duties. Lawless and Jose Oquendo, therefore, shared the starting third base duties in the World Series, despite the fact that Lawless had hit .080 with only 2 hits in the regular season as he battled injuries. His only hit in the World Series was a big one. In Game 4, Lawless hit a three-run home run, which was only the second in his entire career. Perhaps feeling powerful, Lawless hit his second (regular season) home run in 1988 but batted just .154.

After his playing career, Tom Lawless managed for several years in the minors, including the Midwest League (5 years), Carolina League (2 years) and the California, South Atlantic and Texas Leagues (1 year each). 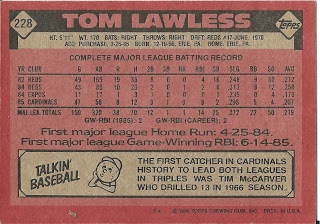 Rear guard: Ha! Maybe Topps should have cited Lawless' only home run (at the time). But that would be mean. The Lawless "shot heard round the Lawless kitchen table" was launched off of Braves pitcher Ken Dayley, who actually saved the game in the World Series that Lawless had hit his second career home run.


Before Tim McCarver was a droning, befuddled color man on TV who frequently gets his analysis mixed up, he was a really good catcher for several teams (all but one had the color red in their uniform, strangely enough. Other than the year he hit 13 triples (represented by this card), McCarver did not have another season where he reached double digits in that category.

This date in baseball history: In the old days, a pitcher's warm up pitches lasted until a batter stepped in the box. On this day in 1911, A's first baseman Stuffy McInnins hits a home run on a "warm up pitch." The Red Sox  protest, although it does not reverse the homer, leads to a rule that spells out how many warm up pitches a pitcher gets in each inning.