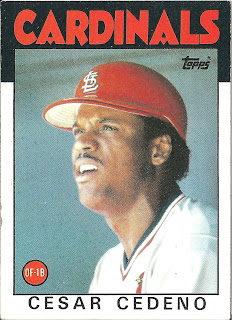 Card thoughts:  This is Cedeno’s last card. And seeing this card, I never remembered Cedeno as a Cardinal. He was only there at the tail end of the season, and was with the Reds before so this could be airbrushed, as the teams wear the same colors. But it would have to be the best airbrushed card in Topps history, because if you look closely, so can see a little cardinal peeking out of the folds on his shirt. This is a detail that would be unnecessary to add.

The player: Cedeno came into the league billed as “The Next Willie Mays” by none other than the former great’s manager Lou Durocher. Cedeno had it all: he played a great center field, could run, had power (even though the Astrodome sapped a lot of it), and could hit for average.

But unfortunately, Cedeno had a bit of a violent streak (to put it lightly). In 1973, he shot and killed his 19-year old mistress in a seedy hotel in Santo Domingo after getting drunk and high with her (although it was ruled involuntary manslaughter—they were fighting for the gun). Not much justice back then in the Dominican, and Cedeno got off easy with a 100 peso fine. He also got in a violent confrontation with police in 195 after an argument with another girlfriend; smashed a bottle over a man’s head after he accidentally bumped him in a bar in 1986; and later beat up still another girlfriend in 1988.

Cedeno’s 1978 season was marred by injury and on the field blowups. He injured his hand after slamming it into the dugout after making an out in a game in June. A much more serious knee injury soon after kept him out until September. After an injury free 1979 season where he mostly played first base to protect his knee, Cedeno propelled the Astros to their first ever playoff berth with a comeback season which ended with 10 home runs, 71 RBIs, 48 steals, and a .262/.348/.374 line. In the NLCS, he hit only .182 and hurt his ankle, which would sap most of his speed for the rest of his career.

The Astros made it back to the playoffs the following year, and Cedeno did a little bit better, hitting .214. But the Astros—correctly, as it turns out—felt Cedeno’s career was in decline. They traded him to the Reds at the end of 1981 for #27 Ray Knight.

#1 Pete Rose had been quoted years ago that if Cedeno was on the Reds, he’d become the best player in the league. Well, he eventually made it, but superstardom was long in the past, and Rose was on the Phillies. Cedeno hit for a good average for the Reds from 1982-1985, but was only a regular for the 1983 season. His power and speed had been lessened by age, and by the time he was traded to the Cardinals 1985, he had become the Reds fourth outfielder.

Cedeno played that August and September for the Cardinals as if he knew he was nearing the end and wanted to go out on a high note. Cedeno hit an incredible .434 in 76 at bats and hit 6 home runs and batted in 19 runs filling in at first for the injured Jack Clark. In the playoffs, he filled in as the starter in left for the sidelined Vince Coleman but had averages of .167 and .133 and drove in only 1 run.

Cedeno ended a potential hall of fame career, marred by injury and personal issues, with the Dodgers on June 2, 1986. He started in left and scored a run after walking and stealing second. 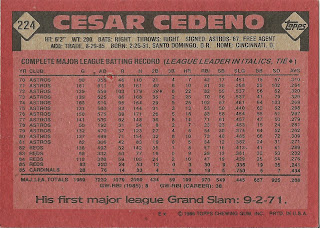 Rear guard: Once again, I was always excited when I turned a card over and the stats were in fine print. Especially if a player had led the league in a category a long, long time ago.

Cedeno went 3 for 4 the day of his first grand slam, adding a double and a single. His granny was off Dodgers pitcher Claude Osteen and drove in Marty Martinez (on with a single); Don Wilson (on after hitting a comebacker to the mound, forcing Larry Howard at home); and future Hall of Famer and color bloviator Joe Morgan (who had walked).

This date in baseball history:  The first organized baseball game in history is played on this date in 1846 in Hoboken, New Jersey.
Posted by Jets Break Jaws at 10:14 PM

I am trying to figure out the error card I have of this card. The way Topps cut was very ridiculous. Can't find another like it.