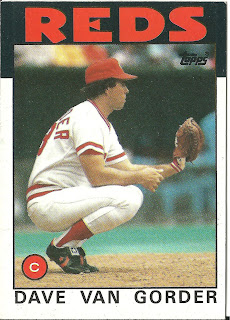 Card thoughts: This is a very odd card. First of all, Van Gorder is in the catching position during a game, but isn't wearing any catching gear. He's likely catching a ceremonial first pitch. Also, you can barely see his face, as the perspective of the shot makes his head look really tiny, and he's turned a bit away from the camera. This would be Van Gorder's last card.

The player: Van Gorder was the first of many catchers the Reds tried in replacement of legend Johnny Bench. He had an average, but accurate, throwing arm and was good at blocking pitches. But like many catchers, the mental and physical demands of catching left little room to improve on his hitting. He had a 51 game trial in 1982 backing up Alex Trevino, but he hit only .185. It was back to the minors for the entire 1983 season, but he returned in 1984 for 32 games, only to hit .228. The year represented by this card was Van Gorder's best year. As part of an unusual three man catching platoon with Dann Billardello, and Alan Knicely (later, Bo Diaz), Van Gorder got into 73 games, but still was a poor hitter at .238. He also had a poor caught stealing percentage at 23%.

Despite this, Van Gorder sought arbitration, and won, doubling his salary for the 1986 season. Reds owner Marge Schott wasn't too pleased with this, and allegedly threatened to trade or sell Van Gorder if he pursued this path. It was all smoothed over for the 1986 season, but Van Gorder was demoted to the minors and was released at the end of the year anyway. The Orioles picked him up for his final season in 1987, but he spent most of the year in the minors, and went only 5 for 21 in the majors. 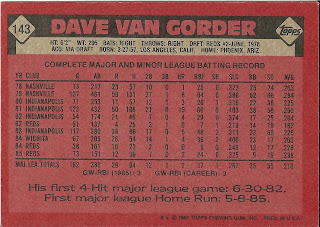 Rear guard: Van Gorder never really had a good minor league season either, save the 1981 season at Indianapolis. His four hit game came against the Giants. One hit was the only triple in his career and it scored #22 Duane Walker from second. After that 4 for 5 game, Van Gorder was hitting .318.
Posted by Jets Break Jaws at 7:04 PM

He won his case? Must have had a good agent.

Two cards in a row of players who, if baseball cards of them didn't exist, you'd have to convince me were actual major leaguers. Who are these guys?