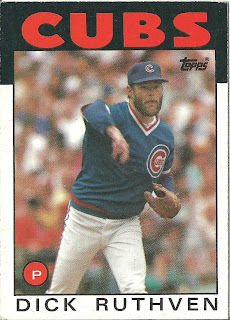 Card thoughts: Another Cub I have no recollection of , but that's probably good as I've never trusted men with beady eyes. Other than that, Ruthven's arm is a strange, awkward blur as he throws to first.


The player: Ruthven was a well-traveled, fairly poor pitcher whose only league leads came in the bad pitching categories (losses, earned runs and runs given up, errors). Despite this, he was twice an all-star and was highly sought after by some very good teams. Ruthven was an innings-eater whose record generally hovered around the .500 mark and whose ERA in those low scoring days was north of 4. His career in the 70s with the Phillies and the Brave was marked by sub-.500 records, lots of walks, and high ERAs. He made the all-star team in 1976 despite leading the league in losses. However, that partly the result of being on a last place team. His career turned around in when he was traded back to the Phillies in 1978 for reliever Gene Garber. Once back with the Phillies, he went 13-5 to helped the team make the playoffs. Unfortunately, he lost his only NLDS start. His best season came two years later with the World Series winning 1980 club. He went 17-10 despite a poor strikeout-to-walk ratio. Ruthven went 9 innings in both of his playoff starts, giving up 3 runs or less in both of them. After the season, he appeared on Family Feud with some other Phillies opposite the Kansas City Royals.

The next season, he made the all-star team again because of his 8-3 record before the player's strike. However, he ended up with a 5.10 ERA and in the playoffs that year, he pitched poorly. Ruthven came to the Cubs in 1983 as part of the mass Philadelphia-to-Chicago transfer that would provide the nucleus for the Cubs' 1984 division winner. The Cubs came out the worse in this trade, unlike some of the others, as they sent future Cy Young award winner and MVP Willie Hernandez to the Phillies for Ruthven. With the Cuibs, Ruthven's ERAs stayed consistently high, although he was the Cubs top pitcher in 1983 with a 12-9 record. In spring-training that year, he brawled with outfielder Mel Hall. Despite this, he was named the opening day starter for the division winning 1984 team. But he went only 6-10 for the season and was left off of the playoff roster. By the time the picture of Ruthven was taken on this card, he was aging fast and often injured. He would be released the next season, ending his career. 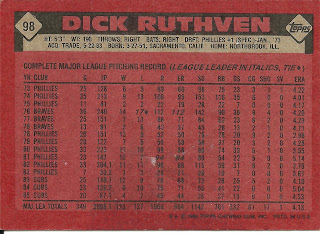 Rear guard: I got nothing.
Posted by Jets Break Jaws at 4:11 PM