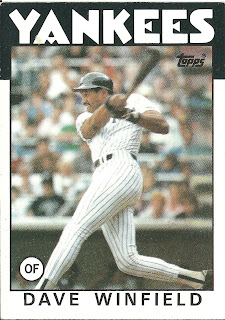 Card thoughts: Just a classic shot of Winfield smacking one of his many hits at Yankee Stadium. Of course, it could have been a fly out.

The player: Winfield is one of those quiet hall-of-famers. When this photo was taken, he'd yet to have 2,000 hits and only had a .288 career average after playing for 13 years. Much like Dwight Evans ten cards before him, Winfield got better as a he got older. Unlike Dwight Evans, he played well into his 40s. A good rightfielder (and former #1 draft pick) for the Padres, he didn't really take a star turn until 1979 when he led the league in RBIs with 118 and hit a career high 34 home runs. Two years later, he was made the highest paid player in baseball by George Steinbrenner, hoping to propel the Yankees back to World Series victory. Unfortunately, Steinbrenner thought he was signing Winfield to a $16 million dollar contract, rather than a $23 million dollar contract. This led Steinbrenner to make Winfield a scapegoat for the Yankees failure in the 1981 playoffs. Despite "The Boss'" resentment, it didn't effect Winfield's play. He had over 100 RBIs every year from 1982 until 1986. He would be an all-star every year from 1977-1988 and win Gold Gloves 7 times in that span.

Steinbrenner still disliked Winfield, however, and kept trying to trade him or humiliate him publicly. After missing all of 1989 with a back injury, Winfield came back in 1990. However, Steinbrenner was caught paying a known Mafia man $40,000 to get dirt on Winfield, leading to the former's two year ban from baseball. Winfield was traded anyway to the Angels, where had a career resurgence and won the Comeback Player of the Year award. He had even a better year after signing with the Blue Jays a couple of years later. He hit 26 home runs and drove in 108 at age 40, finally getting a World Series ring with the club. The next year, with the Twins, he became one of 19 players (at the time) to get 3,000 hits. It was in the 9th inning off ace closer Dennis Eckersley and drove in Kirby Puckett from third base. It can be seen here.  He was a first ballot hall-of-famer in 2001, the same year his number 31 was retired by the Padres. One more notable thing about Winfield: He was traded to the Indians for a dinner at the end of his career.

Off the field, Winfield is well known for his charity work, and is one those all-around ambassadors for the game. He also has a nifty Website. 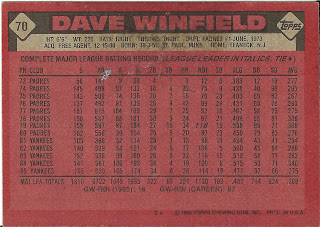 Rear guard: This card was at the end of the pack. Hence, the gum stains.
Posted by Jets Break Jaws at 10:42 PM