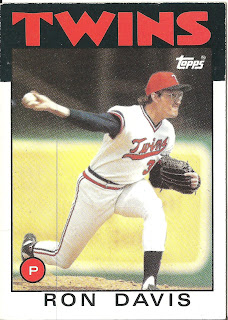 Card thoughts: That's quite a picture flaw, with that line cutting Ron's leg off at the knee. But also a good illustration of Davis' three-quarters motion. Most likely, he's throwing a 90+ fastball.

The player: Ron Davis is a perfect example of the relief pitcher who shines for a time, but can’t keep up the consistency over time.
Davis was originally drafted by the Cubs (who would later acquire him when he was no longer effective—typical Cubs), but was traded after three mediocre minor league seasons as a starter to the Yankees for veteran pitcher (and former Cubs star) Ken Holtzman.

Davis didn’t win Rookie of the Year honors in 1979, but he probably should have as he went 14-2 and led the league with an .875 winning percentage. He also was the first pitcher to be used as the exclusive set-up man for a closer, in this case Goose Gossage. Davis pitched in his role effectively until 1981, with ERAs under 3, and making the all star team in 1981 after having an 0.80 ERA in 33+ first half innings.

You can probably mark the ending of Davis’ effectiveness in the 1981 World Series. After not giving up a run in the previous two post season series (in the strike-shortened 1981 season, there was an ALDS), he imploded in the Yankees loss to the Dodgers. Davis walked 5 and gave up 6 earned runs in 2 1/3 innings.

Perhaps seeing something worrisome in this performance, the Yankees traded him with #162 Greg Gagne to the Twins after the season for Roy Smalley. He immediately drew stingy owner Calvin Griffith's ire after he won an arbitration case that earned him $750,000 for the 1983 season. The skinflint threatened to trade him saying his win "made me so sick I almost vomited", but instead signed him to a lucrative contract that had the interesting clause that he could not be traded until after Kent Tekulve and Goose Gossage had signed contracts in early 1984.

He was installed as the Twins closer for the next several years although his save totals were impressive (1982-22; 1983-30; 1984-29; 1985-24), he was nicknamed “Boom-Boom” for his propensity to blow saves in spectacular fashion, often seemingly coasting to an easy save before walking the bases full and then giving up the big hit.  Davis’ 14 blown saves in 1984 (remember, he saved 29 that year) still stands as a record, and I think as an indicator of how poor the save statistic is for measuring a reliever’s effectiveness.

The Twins were willing to put up with his high wire act until early in the 1986 when, after recording two quick saves, Davis blew another two, in both cases loading the bases with walks after two were out. They found a sucker in the Cubs (always a sucker in these situations) who gave the Twins two of their own disappointing relievers, Ray Fontenot and George Frazier. I recall really hating Davis, and a look at his Cubs stats that season (7.65 ERA in 20 innings) and the next (5.85 ERA in 32 1/3) reminds me why. After spending a bit of time with the Dodgers at the end of the 1987 season, he finished his career with 17 1/3 innings pitched for the Giants the following year.

Davis runs a sort of Little League skills combine, and his son, Ike Davis the starting first baseman for the Mets, is one of the graduates. 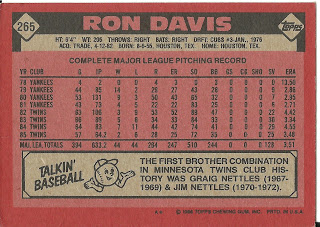 Rear guard: Most people forget that former Yankees and Padres star third baseman Graig Nettles started his career with the Twins. But here's the deal: Were they really a combo if they never played together on the team?

Graig was the more successful brother, having hit over 300 home runs and over 2,000 hits. But Jim was less successful, bouncing up and down from the majors to the minors for 11 years. He hit only 16 career home runs and had 129 career hits. Here's Graig's first card as a Twin, and the same for Jim.