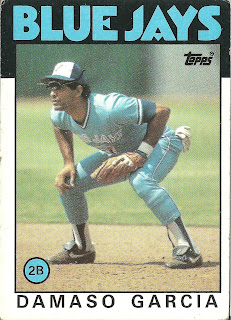 Card thoughts: Here's something it's rare to see these days: flip down sunglasses. In a quick glance, the sunglasses look like some weird antennae sprouting above Garcia's ears. But a good shot nonetheless of Garcia anticipating a ground ball.

The player: In his prime, Damaso Garcia was one of the top second basemen in the American League. He could field, hit for average, and had above average speed. This was apparent almost immediately, as he came in 4th in the Rookie of the Year voting in 1980 after hitting .278 and stealing 55 bases. From 1982-1985 he was remarkably consistent, scoring 70-80 runs and hitting .280-.310. He made the all-star team in 1984 and 1985. But after 1986 he was traded to the Braves and he was never a good player again. He was washed up at age 32.

Perhaps his sudden drop in production can be attributed to an undiscovered brain tumor. After Garcia retired, he started having double vision. The doctors found the tumor and told him he had six months to live. But Garcia beat the odds and he is living to this day. 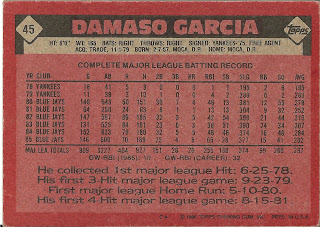 Rear guard: Garcia got his first hit off of Tigers' pitcher Steve Baker; he got his second big league hit in that game as well. He also scored 3 of the Yankees' 4 runs.
Posted by Jets Break Jaws at 8:52 PM