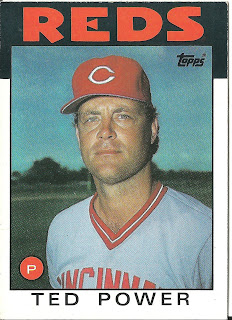 Card thoughts: I guess some Reds also got the grayish dusk treatment that the Red Sox got on their cards. The wrinkles under his eyes suggests to me that Power may also wear glasses. A great name for a pitcher, by the way, although he's not Max Power's brother.

The player: A minor league phenom in the Dodgers system (he won 18 games for their AAA club in 1981), Power was an effective short reliever early in his career, which was spent mostly with the Reds. He led the league in appearances in 1984, pitching in 78 games and 108 2/3 innings. Power was used less the next year, the one represented by this card, although it was his best year as a reliever. He saved 27 games and the best ERA in his career at that point with a 2.70 mark. Ted was converted into a starter the next season, and he was much less effective in that role. Although he won 10 games in both 1986 and 1987, his ERAs were much higher, and he was never much better than a break even proposition when he started.

He was traded away after the 1987 season and became a well traveled pitcher for the next 6 seasons, never playing more than two seasons for any team. He pitched for the Royals, Tigers, Cardinals, Pirates, Reds (again), Indians, and Mariners during those years. Eventually, he was converted back to a reliever by the Pirates in 1990, and he was once again effective, even having a career low 2.54 ERA for the Indians in 1992. Oddly enough, his only start after being reconverted came in the 1990 NLCS against his former team, the Reds. Jim Leyland started Power to screw up the Reds platoon system, and he gave way to Zane Smith in the 3rd inning. For his final year, he once again topped 10 saves, saving 13 for the Mariners while sharing the closer role with Norm Charlton.

Power is currently the pitching coach for the Reds top minor league team, the Louisville Bats. 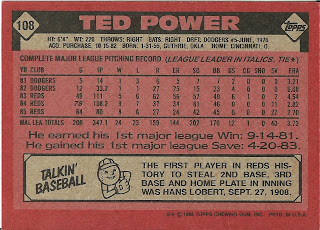 Rear guard: Power won his first game, relieving Burt Hooten in the third inning. But the Padres starter, #52 Chris Welch was also knocked out of the game early in what eventually became a 10-4 Dodger victory. Power pitched 2 2/3 innings, giving up only a double to Terry Kennedy.

Stealing bases was much more common in the early part of the century than now (stealing home is almost unheard of now that pitchers use the slide step). Lobert stole 20 bases in 1908 as a utility player; he would steal 316 over a 14 year career.
Posted by Jets Break Jaws at 10:41 PM