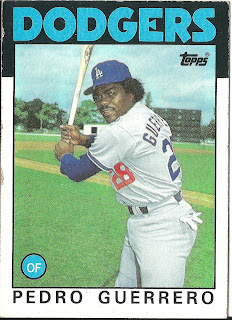 ,
Card thoughts: The classic sideline shot at spring training. At one time, about 80% position player cards looked like this. Also, Guerrero played a significant amount of time at third this season, so that should have been included in the position circle.

The player: There's a lot of things I miss about mid 80s style baseball. The steal. The lack of middle relievers. The excitement of the home run (a lot rarer back then). The complete game. What I don't miss: Teams making a video of a crappy team song. Yes, Guerrero starred in one of the worst of these, the "Baseball Boogie." That's him in the pink satin jacket.

Although Guerrero looks the fool in this video, there were few batters I feared more coming up against the Cubs. In one of the great steals in Dodger history, he was acquired while still in rookie ball for pitcher Bruce Ellingsen, who only pitched 16 innings for the Indians. He came up as a reserve outfielder for the Dodgers, but quickly made an impression on the team. In the 1981 World Series, he drove in 5 runs in the deciding game, sharing co-MVP honors with Ron Cey and #32 Steve Yeager. The following year, Guerrero became the first Dodger to hit over 30 home runs and steal more that 20 bases; he did it again 1983, while also driving in over 100 runs both years. That year he moved to third (his orginal position in the minors) to replace Ron Cey. His fielding was poor, with a league leading 30 errors, and a poor .932 fielding percentage.

Moving to third didn't affect his hitting; Guerrero still remained one of the best clutch hitters in the game. But he began to split time between third, first, and the outfield in order to not expose his defensive liabilities too much. Guerrero's best season may have been the one represented by this card. He led the league in on base percentage and slugging, while hitting 34 home runs and scoring 99. After being injured with a ruptured tendon (as a result of his penchant for poor sliding) for most of 1986, Guerrero had another impressive season in 1987.

The next season, in a midst of a pennant race, the Dodgers decided they needed a starter more than a slugger, so he was sent to the Cardinals for pitcher John Tudor. The Cardinals outfield was crowded, so Guerrero took over at first. In his first full season the Cardinals, Guerrero was quite impressive. With all the speed merchants hitting ahead of him, he drove in 117 runs with only 17 home runs. His league leading 42 doubles helped as well. Guerrero's  power numbers would drop slowly in his last two years as a regular player, but he still was a good RBI man. His fielding declined as well, as he led the league in errors every year as the regular Cardinal first baseman. He was a free agent after the 1992 season, when he only got 146 at bats as a result of a shoulder injury, but no one wanted him. Guerrero played for a bit for indy ball, but then gave up the game for good after one last try with the Angels AA club (he hit .302 there).

Guerrero had some trouble with the law after his playing days were over. A long time cocaine user, he was busted trying set up a drug deal. However, in a kind of sad turn of events, Guerrero beat the rap when it was proven he was not intelligent enough to understand what he was doing. His IQ was only 80 (below 80 is a sign of mental retardation), as he had dropped out of school at 12. He could not read or write, and his wife had to dole out an allowance to him so he wouldn't squander all his money. 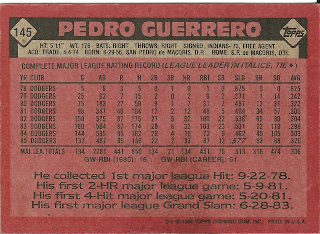 Rear guard: (Note the gum stain.) It seemed like every Dominican player in those days came from San Pedro de Marcoris (especially shortstops). Apparently, many of the contract laborers on the sugar plantations came from the Eastern Carribean, and these workers played cricket. Since the estates were run by Americans, they taught their workers the game, and it spread like wildfire throughout the community.

Yeah, he was a terrific hitter loaded with natural ability. I always though he could have put up bigger numbers but impressive still overall..that 85 season was especially noteworthy while playing home games in the spacious fields of Dodger Stadium. Had no idea about the IQ thing, stunning...