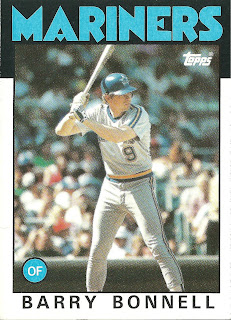 The player: Bonnell came up in the Braves system and broke into the big leagues in 1977, hitting .300. With the Braves, and later the Blue Jays, Bonnell was a high average, streaky hitter with little power. He generally drove in only 40-50 runs a year. Bonnell's best season was in 1983 with the Blue Jays when he hit .318 and slugged .469, both career highs.  He was a good defensive outfielder who could play all three outfield positions and possessed an excellent, strong arm. In 1984, after coming to the Mariners, Bonnell developed Valley Fever. This ended up curtailing his career. He managed to get into 110 games in 1984 while playing through the illness, but he was only a part-time player for the last two years of his career.

Bonnell's life outside of baseball is pretty interesting. A devout Mormon who was derisively tagged with the nickname "Preacher". Bonnell is responsible for converting former Braves star Dale Murphy to the faith. He once admonished a group of kids from his church for holding up a banner that said "Give 'em Hell, Barry." After baseball, Bonnell was a Mormon bishop, an airline pilot, an importer, a salesman for home medical supplies, and blacksmith hobbyist. He is currently pursuing a writing career. 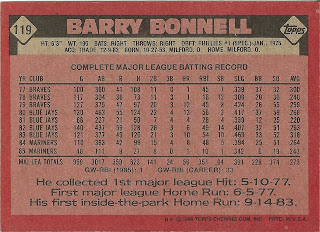 Rear guard:  Bonnell's inside the park home run was against his future team the Seattle Mariners. It was a ball that was off the left centerfield wall, and bounded quickly back to the infield on the springy Kingdome AstroTurf. Bonnell also scored the tying run that day.
Posted by Jets Break Jaws at 12:52 PM

Interesting facts about Mr. Bonnell. Valley Fever can really do a number on you.

Bonnell actually started in the Phillies system. He was a 31 draft pick, and was later traded to the Braves in their Dick Allen re-acquisition.