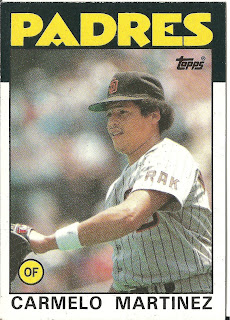 Card thoughts: When I was a kid, we had to sell Caramello bars as a fundraiser. Carmelo Martinez always reminded me of that. RAK stands for Ray A Kroc, former owner of the Padres (and founder of McDonald's) who died in 1984. Which makes this picture suspicious, as it is supposed to depict Martinez during the 1985 season.

The player: The cousin of longtime Mariners designated hitter Edgar Martinez, Carmelo Martinez was a top Cubs prospect that was seen as a legitimate home run threat early in career, although that power would wane in his late 20s. He made a great start with the Cubs, hitting a home run in his first at bat. The Padres got him as part of a three team trade, with the Cubs receiving solid fourth starter Scott Sanderson from the Expos. He went easy on his former team in the playoffs in 1984, hitting only .176. The next year, the one shown on this card, was Martinez' career year. He hit a career high 21 home runs and drove in 72. Despite this, he was relegated to a backup role the next year when future ESPN bloviator John Kruk was brought up. He regained his starting role again in 1987 and had a few more solid years as a Padre regular, before settling into a pinch-hitting/first baseman/outfielder role on several teams the last couple years of his career. He actually played for three teams in 1991, his final season.

After his playing career was over, Martinez spent 6 years as manager and 8 years as hitting coach with the Cubs rookie league team. He also managed the Peoria Chiefs for Ryne Sandberg when the latter was inducted into the Hall of Fame. It was doing this duty when he touched off a vicious bench clearing brawl by arguing with the manager of the Dayton Dragons as seen here. 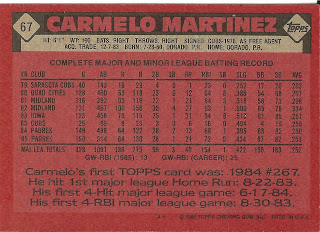 Rear guard: Martinez' first Topps card, his only card in a Cubs uniform, can be seen here. In addition to hitting a home run in his first at bat that year, he drove in 4 runs against the Braves; 3 came on a home run in the first inning that scored Leon Durham and Ron Cey, and the last came on a fielders choice that scored Durham again in the fifth inning.
Posted by Jets Break Jaws at 9:04 PM