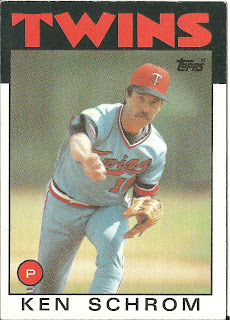 Card thoughts: What's with all the powder blue uniforms in the 80s? Just a really unfortunate away uniform. The Twins are one of those teams that always seem to have an unfortunate color scheme. The red, dark blue, and light blue combo is pretty atrocious, even by their standards. I do really dig the old "T/C" logo though. Besides that, Schrom's right arm looks kind of scary in this picture. Like an alien's claw.

The player: Ken Schrom had a really strange career. He had two great years just after his first year with a new team: 1983 with the Twins and 1986 with the Indians. After posting ERAs over 5 in his first two seasons with the 'Jays, he was released and signed by the Twins. He proceeded to win 15 games, despite walking as many as he struck out (80). He then had two more mediocre seasons with the Twins, which prompted them to give up on him, trading him to the Indians for Roy Smith. He then goes 14-7 for the Tribe and represents them at the all-star game in 1986 (although he didn't pitch). The next year, he loses 13 games, has an ERA over 6, and retires at seasons end.

But he wouldn't be out of baseball for long. He became a front office executive in the Texas League for the El Paso Diablos for 15 years and he is currently the president of the Corpus Christi franchise, the AA affiliate for the Astros. Here he is talking about the team. He's pretty upbeat. But the team is currently last in their division and has lost 10 in a row. 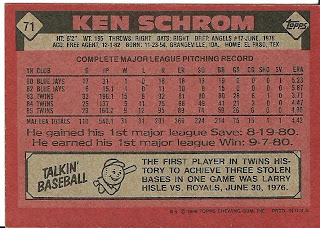 Rear guard: Odd that Topps would cite Schrom's first save. It was his only career save at the time. His first win, however came in relief of Luis Leal against the White Sox. He pitched 2 1/3 innings and gave up a run on 4 hits, the only run coming on a Jim Morrison home run.


Larry Hisle was a star for the Twins in the 70s. He led the league in RBIs with 119 in 1977 before signing as a free agent with the Brewers where he had a similar year. A torn rotator cuff at age 32 ended his career as a regular player.