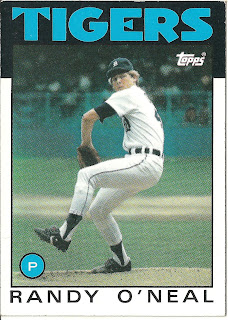 Card thoughts: I love how these Tiger action shots are actually taken at Tiger Stadium. There never seems to be anyone in the stands though. O'Neal looks like a small guy here, probably because of his crouching, deceptive delivery, but he was actually 6'2"

The player: O'Neal spent his career as an insurance policy for several different clubs. He swung between starting and long relief with the Tigers, Braves, Giants, Phillies, and Cardinals, spending time in the minors at least part of all of these seasons. He generally had a sub-.500 record and an ERA north of 4. He could be wild. He was 5th in the National League with 10 wild pitches in 1987, despite only pitching 66 innings. The season shown on this card was perhaps his best season, as he sported a career low 3.24 ERA. He wouldn't get his ERA below 4 again until his last season with the Giants when he sported a 3.83 mark in 47 innings. IN 7 seasons, he ended with a 17-19 record. He does have a black mark with some players, however, as he crossed the picket line during spring training when the players struck in 1995. For that, he was kicked out of the union and will get no pension. 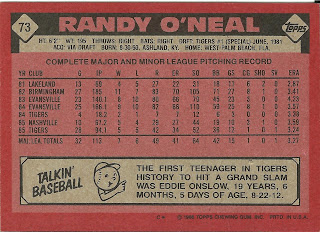 Rear guard: No, it's not this Onslow. Eddie Onslow only played 64 major league games, and he spread that out between the ages of 19, 20, 25, and 34. He did play 20 years in the minors, however, mostly with Toronto and Providence in the International League where he rarely hit under .300.
Posted by Jets Break Jaws at 10:10 PM