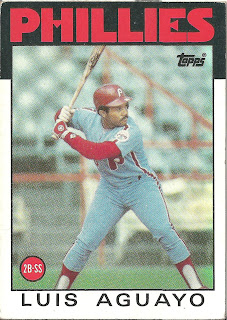 Card thoughts: A very dynamic photo of Aguayo in his Phillies pajamas. To say that Aguayo was not a dymaic hitter is an understatement--he hit only .236 in his career. The position circle is incorrect as well, as Aguayo played over 70% of his games at short this season (insurance for erratic rookie Steve Jeltz), and only 20% at second. I always wondered as a kid how Topps determined whether a player was a 1B-OF of an OF-1B. I'm still wondering.

The player: "Luis Aguayo is on deck. Aguayo hasn't exactly been reminding anybody of Rogers Hornsby lately." This quote by Phillies broadcaster Richie Ashburn sums up Agayo's career. In an era of more realistic salaries a guy like Aguayo who really only played third base well, could hang around for years on the same team, riding the bench, hitting the occasional home run and making the occasional dazzling play. Aguayo hit .240 in his 9 year Phillie career, and slugged a surprising 37 home runs (12 in 209 at bats in 1987). He also played for the Yankees (50 games in 1988) and the Indians (47 games in 1989).

Aguayo has been a minor league manager for some years now, with the Reds, Red Sox and now the Cardinals (he must dig the color red!). He hasn't been too successful. None of his teams has finished higher than 5th. 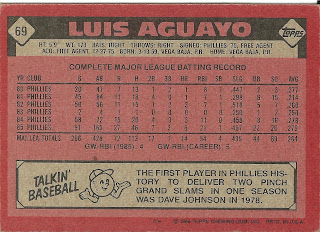