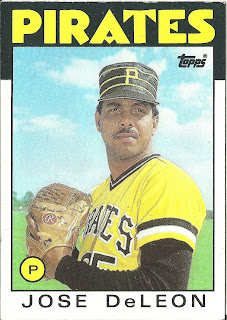 Card thoughts: Like a bee, buzzing in a beautiful meadow on a summer day.

The player: DeLeon had two seasons, including the one represented by this card, where he lost 19 games. Yet his career winning percentage was .420 and he had respectable ERA of 3.76. His worst season was definitely 1985 when won only 2 games while losing 19; his other 19 loss season in 1990 while with the Cardinals he managed to win 7 games. DeLeon was more a victim of being on lousy teams that gave him poor run support rather than being a bad pitcher. His repertoire included a forkball and a rising fastball which led to a lot of strikeouts. He also tended to have high walk totals, but gave up few hits. Only he and Kerry Wood have less than 200 wins with more than 1500 career strikeouts. 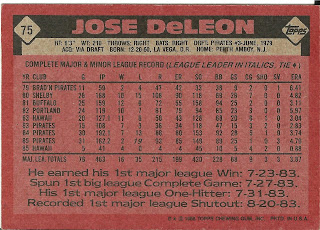 Rear guard: 1983 was a good start for DeLeon's career. He finished 7th in Rookie of the Year voting, and pitched a one hitter. Unfortunately, as an indicator of DeLeon's future hard luck career he lost that game. The Pirates only had 3 hits off of Mets pitcher Mike Torrez (in 11 innings!)  to support him, and after 9 innings the score was tied 0-0. Reliever Manny Sarmiento gave up a RBI grounder to George Foster to lose the game.
Posted by Jets Break Jaws at 9:26 PM