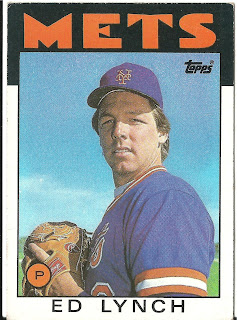 Card thoughts: Ed Lynch pretty much still looked like this when he was GM for the Cubs. It's not that he looked youthful then, it's just that Lynch always looked like an old guy even when he was only 30 years old.

The player: Ed Lynch was good enough to be a starter on the more mediocre Mets teams in the early 80s.  Lynch had some good years with the Mets, winning 10 games in 1983, 9 games in 1984, and 10 in the year represented by this card. His main weapon on the mound was guile and control. He walked only 27 batters in 191 innings in 1985, but also struck out only 65. However, he was traded to the Cubs in 1986 when the Mets won the World Series, after tearing up his knee early in the season. After two so-so years for the Cubs, he retired.

After his playing days were over, he went to law school and used his education and playing experience to become general manager of the Chicago Cubs from 1994-2000, are rare position for a former player who had never managed. He was not a very good general manager because, with the exception of 1998, the Cubs had some really terrible seasons full of malaise in those years. Here he is talking about Harry Caray's death (at 5:35). He currently scouts for the Toronto Blue Jays. 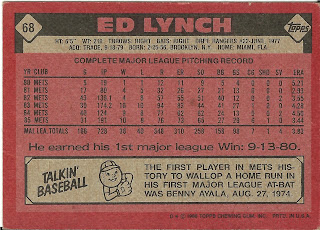 Rear guard: Lynch's first win was against the Cubs, beating Lynn McGlothen. He gave up 1 earned run and 2 strikeouts in 6 innings. Benny Ayala's career was limited due to poor fielding. He was mostly a designated hitter/pinch hitter for several good Orioles teams in the late 70s and early 80s.
Posted by Jets Break Jaws at 4:12 PM