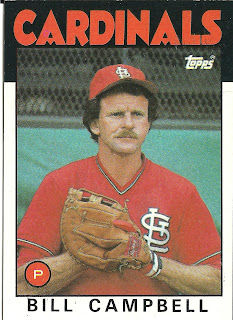 Card thoughts: For some reason, that aquamarine background really brings out the red in this card. Another spring training shot, as I don't think the Cardinals ever had a solid red road uniform.

The player: Bill Campbell's fastball only reached the upper 80s, but he had an excellent screwball, and his herky-jerky motion hid the ball well, helping him become one of the great short relievers in the 1970s. Here is demonstrating some of the pitches he threw. Campbell wasn't used like a short reliever of today. He would often pitch 2 or 3 innings to get a save. After a brief audition the previous year, he became the Twins closer in 1974. Pitching in 63 and 120 innings, he racked up 19 saves. The following year, he was less effective and only saved 4 games. 1976, however, Campbell would have one of the best ever seasons by a reliever. Pitching in a league leading 78 games, Campbell racked up a 17 wins (tied for most wins in relief in the American League) to go along with 20 saves. He also pitched an incredible 168 innings, a inning count a lot of regular starters have trouble reaching today. This breakout season led to the Red Sox making Campbell one the first big money free agents. He didn't disappoint in the first year of his contract, saving a league leading 31 games with an excellent 2.96 ERA. Unfortunately, the heavy workload caught up with him and he battled throughout the rest of his contract with injuries--which made him one of the first free agent busts as well. Finally healthy again with the Cubs, he was back to his inning-eating ways, leading the league again in appearance with 82 in 1983.

After 1983, Campbell became a drifter, appearing in single seasons with the Phillies, Cardinals, Tigers, and Expos. 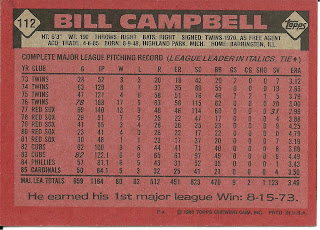 Rear guard: Campbell blew the save against the Tigers but still got the win, pitching 3 innings in relief of Joe Decker who had given up 6 runs. Campbell gave up 1 run on a home run by Eddie Brinkman, while striking out and walking 1 batter.
Posted by Jets Break Jaws at 8:08 PM