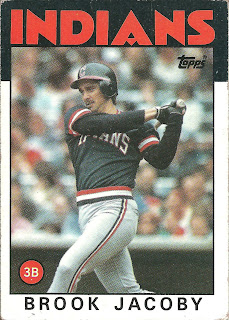 Card thoughts: Either those pants are really high-waisted, or Jacoby's torso is really out of proportion to his legs. I remember this name I found hard to pronounce, due to its unfamiliar, upper-class origins. For years, I thought the guy's name was Jack-o-bee.

The player: Jacoby was stuck behind Bob Horner as a Brave. So the Braves made on of the worst trades in their history and sent he and future star Brett Butler to the Indians for washed-up pitcher #24 Len Barker. Jacoby immediately became the Indians' everyday third baseman, and remained so for the next seven years. The year shown by this card was his first good season, as he hit 20 home runs and drove in 87; in 1986 he made the all-star team and drove in another 80 runs; and in the homer-happy year of 1987, Jacoby managed to reach the top 10 in home runs with 32. Most of those were solo shots, however, as he drove in only 69. Jacoby continued to put up solid numbers in the following seasons, although his power numbers diminished after that '87 season. He made the all-star team once again in 1990, but after a prolonged slump stemming from an elbow injury in 1991, he was traded to the A's. After lasting only half of season in Oakland, Jacoby returned to the Indians as a backup infielder in 1992. An injury to young third baseman Jim Thome pressed him into regular service once again, but he produced a paltry 72 hits and .326 slugging percentage. That was his last year as a player.

Jacoby has been the Cincinnati Reds hitting coach for the last 5 years. Here's an overview of Jacoby as a hitting coach. 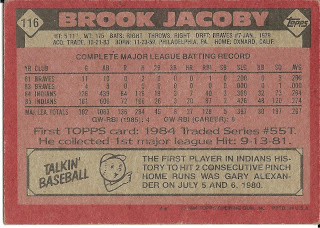 Rear guard: Here's Jacoby's first Topps card. I never counted traded cards as rookies, as they were released in limited quantities very late in the year. Jacoby's first hit was an RBI single off of Padres pitcher Fred Kuhaulua. It drove in #107 Rafael Ramirez.

Gary Alexander was a power hitter who struck out too much to be an everyday player. Both pinch home runs came against the Yankees.
Posted by Jets Break Jaws at 9:38 PM