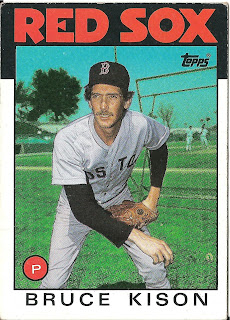 Card thoughts: This is Kison's last Topps card. I also have his rookie card where he is shown in the exact same pose. Other than that, this is one psychedelic card. The players behind Kison look like they're swimming in an unclean aquarium.

The player: Kison entered the league in 1971 and as a rookie he was already pitching some big games. In the NLCS and World Series that year, he didn't give up a run while pitching out of the bullpen, winning 1 game in each series. He didn't give up a postseason run until 1975.

During the regular season, Kison was used as a spot starter and long reliever. He had a reputation as a head hunter and was among the league leader in hit batters three times, despite rarely pitching over 200 innings. Kison pitched sidearm or three-quarters which added more pop to his pitches (and also fed that reputation: a ball pitched from three-quarters often rises). His best season came in 1976 when won 14 games against 9 losses. In 1979, Kison got another World Series ring with the Pirates. He was ineffective in his only World Series start that year, giving up 5 runs in 1/3 of an inning in game 1, seemingly coming unglued after a Phil Garner error. The next year he signed with the Angels and injured his arm. He had some success with the Angels, winning 10 games in 1982 and another 11 in 1983, but he rarely pitched deep into games. The year represented by this card would be Kison's last. 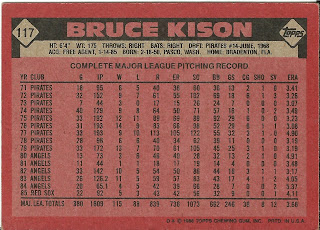