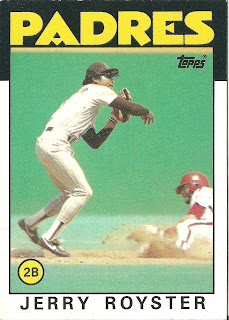 Card thoughts: An exciting shot with a dull background. Looks like it was taken during an afternoon game at Veterans Stadium. I think that may be Ozzie Virgil sliding into second.

The player: Royster came out of the deep Dodger farm system in the 70s, hitting .300 a couple of times for AAA Albuquerque. Once he got to the majors, Royster became a hitter who could drive the ball through the infield, or bloop it over an infielder's head but rarely drive the ball. He did show some good speed, however. Royster had a hard time breaking into the Dodgers' all-star infield and was traded to the Braves in 1976 along with Lee Lacy, Tom Paciorek, and Jimmy Wynn for Dusty Baker. Royster was given an opportunity to play regularly at third base that year, but he made 18 errors in 148 games. He never again played over 100 games at any position, as the Braves played him at second, third, and in the outfield.

He was not a great fielder at any of these positions, but he was adequate. Royster was in the lineup for his speed and on-base ability and he actually scored over 100 runs and stole 35 bases in 1979 when he was given a chance to hit at the top of the order. But that year would be his last as a regular player. Although Royster continued to get into nearly 100 games a year, it was generally as a substitute. The year shown on this card was his first with the Padres. After one more year with the club, he would fill the utility role for the White Sox (55 games), Yankees (18 games), and Braves (68 games) before he ended his career in 1988. Royster ended up playing over 600 games at third, 400 games at second, and about 100 each at shortstop and in the outfield.

After his playing career was over, Royster coached and managed for a time in the minors. He coached for Davey Lopes on the Brewers in 1992, and took over the team after Lopes was fired. He had a disappointing 53-94 the rest of the season and was fired. Royster later became the first non-Korean to manage in the Korean League. In an amusing promotional spot, Royster seems excited to be managing the Lotte Giants. If anyone reading this speaks Korean, it would be nice to know what's going on here (oddly, Royster speaks no Korean, only English, in the ad). 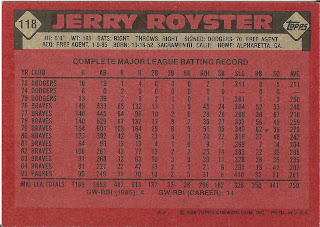 Rear guard: Most players hit worse when they get to the West Coast; Royster managed to post a career high slugging percentage in his first year with San Diego.
Posted by Jets Break Jaws at 9:39 PM

Awesome card. I was sad when Royster was traded from the Dodgers. What did I know?