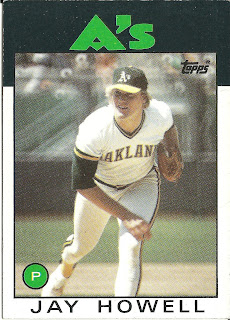 Card thoughts: I always think of Howell as a Dodger. In this shot, I think of him as a young God in the flower of youth, emerging from the golden sun.

The player: Howell was a pitcher with tons of potential who didn't become great until teams stopped forcing him to be a starter. After an up and down minor league career for the Reds and Cubs, and Yankees, Howell finally became a reliable reliever for the latter team in 1984. This promptly got him included in the first of two blockbuster trades he was involved in where the Yankees got Rickey Henderson and the A's got a bunch of young players who went on to have good careers . . . but usually for someone else.

The West Coast agreed with Howell and he made the all-star team for the first of three times in the year represented by this card, saving a career high 29 games with a 2.85 ERA. Unfortunately, his ERA rose each of the two years after that, making him expendable. Thus, the second blockbuster trade he was involved with came to be. The Dodgers, Mets, and A's were involved and some of the other players who changed teams were Alfredo Griffin, Jesse Orosco, Kevin Tapani, Matt Young, and Bob Welch. This trade would put in place the players that led to World Series titles for both the Dodgers and A's in the next couple of years. Howell was a big part of the Dodgers '88 title. He had a 2.08 ERA during the regular season and saved 21 games. In the playoffs he was terrible, however, and was caught using pine tar to doctor the ball, leading to his suspension for two games in the NLCS.

Howell continued pitching effectively for the Dodgers, with ERAs of 1.58, 2.18, 3.18, and 1.54 and double digits in saves over the next four years. After signing with the Braves in 1993 he had one more good year before ending his career with the Rangers at age 38. He coached baseball for California State-Northridge from 1998 to 2005. 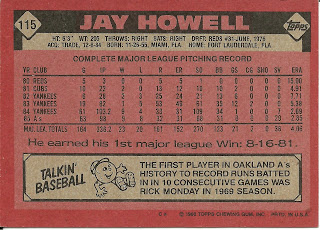 Rear guard: Howell's first win came in the second game of a double header against the Pirates. He lasted 5 1/3 innings, giving up 4 runs on 6 hits. He also helped himself out by scoring a run and placing two sacrifice bunts.

Rick Monday was most famous for saving an American flag from being burned, but he was a solid outfielder for many teams during his 16 year career. Like Howell, he played for the A's, Dodgers, and Cubs. He only had 54 RBIs in the 1969 season.
Posted by Jets Break Jaws at 9:10 PM