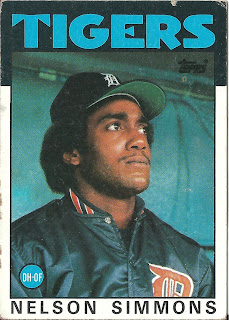 Card thoughts: Simmons looks lonely and cold, sitting by himself on the bench. Maybe he's sad because he realizes this will be his only Topps card. And the position should read "OF-DH," as he played the field more.

The player: Some ballplayers resemble submarines. They surface only a brief time in the majors, yet their career is long. Through perseverance, blind hope, a passion for the game, or just lack of anything better to do with their life, they continue toiling in obscurity in the minors. Simmons is that type of player. In a cup of coffee with the Tigers in 1984, the switch-hitting Simmons mashed the ball at a .433 clip. Impressed, the Tigers made him a reserve outfielder the next year, the one represented by the card. Here, he was less effective, hitting only .239, but showing good power with 1/3 of his 60 hits going for extra bases (11 doubles and 10 home runs). Two of the home runs came in a game against the Orioles where hit one from both sides of the plate (each off of a different Martinez!). Simmons surfaced again for his opponent that day in 1987 for 16 games.

But at age 24, that would be the last he would see of the majors. Instead, he played 7 more years of affiliated ball for various organizations, hitting just enough to make a AAA or AA squad. Simmons career as an organization man was followed by 4 years in the independent Western League. He finally ended his career at age 37 with Reynosa in the Mexican League, hitting a measly .217. 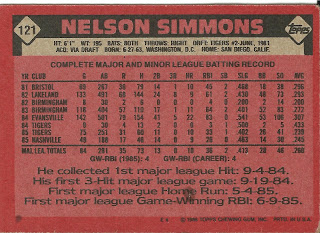 Rear guard: Simmons was on fire in 1984. All three of his hits on September 19 were singles and he stole a base as well. His first home run was a pinch hit, 2-run shot off White Sox pitcher Gene Nelson. He drove in
Chet Lemon.
Posted by Jets Break Jaws at 11:30 PM