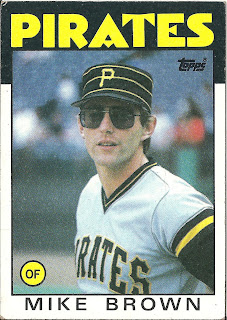 The player: Brown was one of those players who tear up the minors, but never make a mark in the big leagues. After a tremendous season at Edmonton, the AAA affiliate of the Angels, where he hit 22 home runs, drove in 106, and hit .355, Brown was called up to the big club. After hitting .284 in limited duty in 1984, he hit a respectable .268 the next year, finding it hard to get regular playing time in the outfield.

The Pirates thought highly of him and he was traded to them in midseason as part of a blockbuster deal where the Pirates sent veterans John Candelaria, Al Holland, and George Hendrick for Bob Kipper and a bunch of young players who didn't pan out. Finally getting a chance play every day, Brown shone, sporting a .332 average and .512 slugging percentage as the regular rightfielder for the remainder of the '85 season. Given the rightfield job the following year, Brown stumbled badly, hitting only .218. This was unfortunate, as competition by Bobby Bonilla, Andy Van Slyke, and Barry Bonds in the outfield meant that the Pirates no longer needed to be patient with an ex-prospect who had had one good major league season. Brown would see only 18 more games of major league action in 1988 for his original team, the Angels, before disappearing as an organization man into the minors. 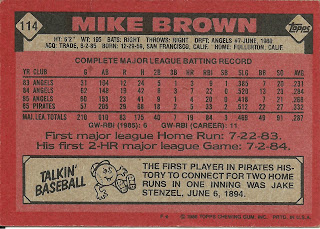 Rear guard: Mike Brown's first home run came in the second inning off of the Tigers' Milt Wilcox. It drove in Bobby Grich. Those runs were lost in the shuffle of a 13-11 slugfest lost by the Angels.

Its a little known story but Bill Madlock was despondant after Kent Tekulve was traded in April of '85. After trading for Brown, manager Chuck Tanner insisted that Brown wear those ridiculous glasses, sit out in the bullpen, and respond when addressed as TK. It worked for a few days until Brown started hitting and blew his cover.