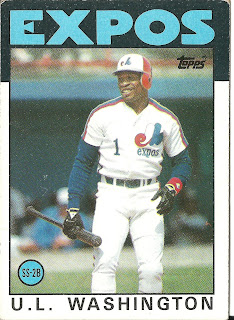 Card thoughts: One of the most awesome all time first names in baseball. Growing up, I used to rack my brain to figure out what U.L. stood for. The only clue I had was the U L logo that appeared on several electrical appliances, but surely his first name wasn't Underwriters Laboratories was it? Now I know. U. L. stands for nothing. That is his given birth name. The one other thing missing from this card is Washington's ubiquitous toothpick. He also barely played any shortstop this year--most of his games were at second.

The player: A star basketball player in high school, Washington had never played organized baseball before being convinced by his brother (an usher at Kaufman Stadium) to try out for the Royals Academy. The Academy was designed to transform raw athletic talent into baseball skills. Washington, along with longtime Royals second baseman Frank White, were the two best players to emerge from the academy. Made into a switch-hitter early in his career, Washington always hit far better from the right side, with more power, although from both sides of the plate he invariably hit balls into right field. His best power year, and best overall season, came in 1982 when he hit 10 home runs, drove in 62 and had a .286 batting average and .414 slugging percentage--all career highs. Washington exhibited blazing speed from both sides of the plate, stealing a career high 40 bases in 1983. And in those days with more turfed stadiums, Washington had the range and arm to play a deep shortstop, but he often made errors on balls other players couldn't get to: He had a league leading 36 errors in 1983.

With the emergence of Onix Conception, and with #99 Buddy Biancalana waiting in the wings, there was no room anymore on the Royals for U.L., and he was shipped to the Expos for two minor league pitchers. He would play only the year represented by this card for the Expos, before playing his two last seasons for the Pirates. 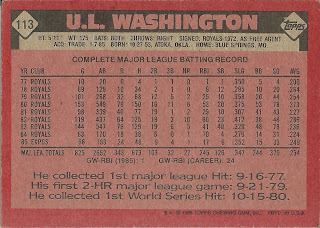 Rear guard: The two-homer game Washington had against the A's in 1979 were the only 2 homers he hit all season. He also drove in 6 runs. Just to show you how baseball has changed: There were only 2,300 people in the stands that night. And it was a Friday night!
Posted by Jets Break Jaws at 10:31 PM

Your site has now been added to the Sports Card Blogroll.