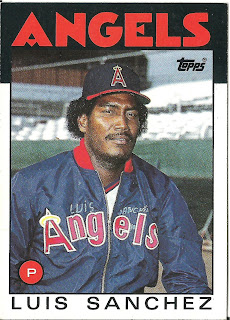 Card thoughts: This would be Sanchez' last Topps card. The weird thing about this card is that Sanchez apparently wrote his name in magic marker on the front of his jacket. That did get me wondering: How do players today know what jacket is theirs? I doubt they write their names on it. It just looks bad.

The player: Sanchez began in the Astros system and was traded to the Reds for Joaquin Andujar. He didn't make it to the majors with either of these teams and was released. He bounced around in non-affliated ball for the next few years battling arm problems. This included a stint with in his native Venezuela for the Caracas franchise of the ill-fated Inter-American League. Sanchez was rescued from obscurity in the Mexican League by the Angels. He made his debut in 1981 as a 27-year old rookie. Although he featured a live fastball, Sanchez was wildly inconsistent, due to tendency to get flustered on the mound. He tended to walk as many batters as he struck out, which made it strange that the Angels eventually made Sanchez their closer. His best year was in 1983 when he went 10-8 and had 7 saves. When Donnie Moore became the Angels closer in 1985, Sanchez' utility to the Angels was limited. He was traded to the Expos after the season shown on this card, and just as promptly sold to the Yomiura Giants in the Japanese league. 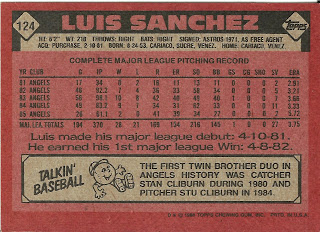 Rear guard: Sanchez made his debut against the Mariners after starter Jesse Jefferson gave up 4 runs in 1 1/3 innings. Sanchez pitched well in 4 1/3 innings, surrendering only 1 unearned run.

Stan Cliburn only played in 1980 batting .179, but had a 15-year minor league career. Stu Cliburn has a card in this set and will be discussed there. They were actually battery mates for one year with Buffalo, a Pittsburgh Pirates affiliate in the Eastern League. They also simultaneously coached for a time in the Minnesota Twins organization. Must have been confusing for those minor leaguers!
Posted by Jets Break Jaws at 3:27 PM