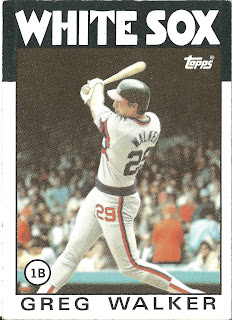 Card thoughts: What a beefcake shot! Some budding Schaumburg Sheila had this card in her hope chest. The uniforms in the mid-80s were so tight, they looked like unitards. I prefer the current baggy look. Way more old school. Yet another shot taken at Tiger Stadium, by the way.

The player: I was surprised when researching Walker how good he was. I always just thought of him as a mediocre hitter, but he had two great seasons. Maybe it was my anti-White Sox bias. Walker was a low average, high power player, your prototypical corner infielder. In an era when offense was at a premium, Walker drove in over 90 runs twice in his career, with a career high 94 driven in in 1987. His power came and went. Although he hit over 20 home runs three times in his career, he was just as likely to hit 'em out in the low double digits. He also showed good range at first. Unfortunately, Walker only managed to have four out of nine seasons where he played in over 100 games (the season shown on this card he played in a league-leading 163 games). Injuries, including a seizure he suffered before a game, shortened his career. Walker was later diagnosed with epilepsy and his career just sort of petered out from there. He retired at age 30 with the Orioles, all but 14 games played with the White Sox.

Walker currently is regarded as one of the better hitting coaches in the game. After serving for 8 years as the White Sox coach, he left the team when Ozzie Guillen was "traded" to the Marlins to become their manager. He will become the hitting coach for the Braves next season (2012). 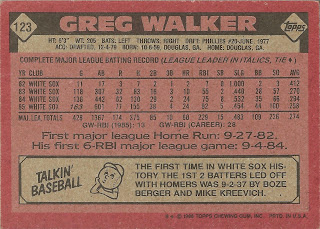 Rear guard: Walker's 6-RBI explosion came off the A's. Four of the RBIs were generated by two two-run home runs.

Berger and Kreevich's home runs came in the 1st game of a doubleheader against Red Sox pitcher Johnny Marcum (Berger would later hit another). The pair combined to drive in 7 runs in the doubleheader. Berger didn't have much of year in '37 (or a career for that matter) but Mike Kreevich was having a career year. He led the league in triples with 16 and had a career high 12 home runs. Although he would never reach double digits again in homers, Kreevich was a productive centerfielder by the standards of the time for several more years with the White Sox, A's, Browns, and Senators.
Posted by Jets Break Jaws at 11:05 PM