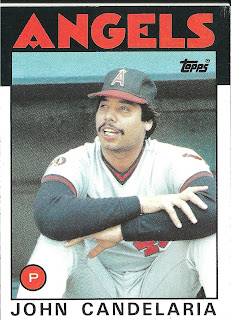 Card thoughts: Candelaria was known as kind of a laid-back, free spirit, and this picture definitely conveys that.

The player: "The Candy Man" was a star basketball player in high school, who impressed the Dodgers at a tryout. However, they reportedly balked at signing him when he came the next day wearing a pro-pot T-shirt. The Dodgers loss was the Pirates gain, as Candelaria established himself at an early age. He featured a devastating fastball and a power curve, which he threw from a three-quarters, almost sidearm position. This put a lot of strain on Candelaria's arm, which would be a factor in his performance by his late 20s.

Candelaria started only 18 games his rookie year, but the Pirates still called on him to pitch Game 3 of the 1975 playoffs. He lost the game, but manged to strike out 14 Reds, which he called his greatest game. The next season was a fine one, with Candelaria sporting a 16-7 record and pitching a no-hitter against the Dodgers. But he really became a star in 1977. Candelaria went 20-5 with a league leading .800 winning percentage, and 2.34 ERA. He also made the all star team for the only time in his career.

Despite being a top-flight starter in his day, Candelaria was a 21st century pitcher trapped in the past, in terms of workload. Due to a fragile arm, Candelaria rarely went more than 7 innings, and this in the day where pitchers were expected to complete about a third of their starts. This led some local sportswriters to criticize him for a lack of desire, which caused him to boycott the press for a time.

Candelaria, like #117 Bruce Kison, was a starter on the 1979 world champion Pirates team. He went 14-5 during the regular season and made two starts in the playoffs. He pitched badly and lost Game 3, but won a do-or-die Game 6, where he went 6 innings and gave up no runs. Candelaria remained a solid starter for the Pirates until the mid-80s, always delivering a good winning percentage, if not a lot of innings. But in the season shown on this card, the Pirates were terrible and they started dumping high-salaried veterans like Candelaria. The Angels picked him up in August, in the trade that sent #114 Mike Brown to the Pirates. He was a steady presence on the field in 1986 during the Angels playoff run, winning 10, and losing only 2 games with a fine 2.55 ERA. Candelaria was excellent in the playoffs as well, giving up only 1 run in 2 starts. He won the AL's comeback player of the year award for that performance. The next season, he was charged with two DUIs, the first of which he blamed on Don Sutton, who had called the cops when a sloshed Candelaria got off a team flight and drove home. He implied that Sutton wanted him out of the rotation so that his spot would be more secure.

Candelaria would play for 6 teams the next 4 seasons, as he was frequently sought after by contending clubs, looking for insurance for the stretch drive. The one whole season he spent with a team in that stretch was the Yankees in 1988, his last as a regular starter. He made it count, winning 13 and losing 7. Candelaria was converted into a left handed relief specialist by the Dodgers in 1991, and that was the role he would play for his last three years in the majors (2 with LA, and 1 with Pittsburgh). He pitched only 25 innings in 50 games in 1992.

He reportedly spends his time now "traveling the world." 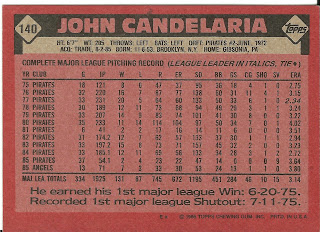 Rear guard: Uncharacteristically, Candelaria's first win against the Mets was a complete game. He struck out 6, walked 1, and only gave up 1 run.
Posted by Jets Break Jaws at 8:51 PM