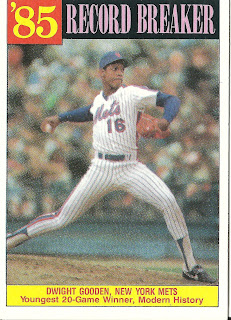 Card thoughts: This is a nice illustration of Gooden’s pitching motion on what looks to be a gloomy day at Shea. His base card is a frontal shot of him pitching in spring training.

The record: The reason why some baseball records are split into the “modern” and “all-time” is that the statistical rules varied widely in the 19th century. Willie McGill, who won 21 games at age 17 for Cincinnati and St. Louis of the American Association, holds the all-time record. Due to babying these days of young pitchers, and the more frequent use of the bullpen, Gooden’s record is unlikely to be broken any time soon. 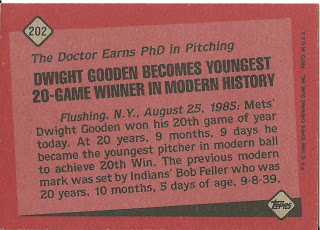 Rear guard: Gooden's 20th win came at home against the San Diego Padres. It was one of his less dominant starts as he went 6 innings and gave up 3 runs while only striking out 4.

This date in baseball history: Joe Morgan's record 91 errorless game streak at second comes to an end in 1978. The record would be broken by Ryne Sandberg and later Placido Polanco.
Posted by Jets Break Jaws at 9:58 PM