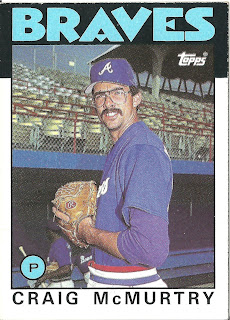 Card thoughts: Here's something you rarely see on a baseball player now: gigantic glasses. Soft contact lenses were still not common in the mid-80s, laser surgery had not yet been invented, and I believe Reds third baseman Chris Sabo was the first to wear prescription sports goggles in baseball, and that was in 1989.
The player: Craig McMurtry won most of the games he would win in his 8-year career in his rookie season. If not for that season, no one would really remember him as a player, even in Atlanta.
Drafted in the first round by the Braves, McMurtry won the International League Pitcher of the Year award while pitching for Richmond in 1982. He won 17 games and had a 3.81 ERA. But, in a worrisome sign, he did this despite walking more (107) than he struck out (96).
McMurtry stormed into the National League in 1983, winning 15 games, losing only 9, with a 3.08 ERA. Only #80 Daryl Strawberry prevented him from winning the Rookie of the Year award, and he came in 7th in Cy Young award voting. The next season, was an absolute disaster for McMurtry as his pitching record was reversed, as he won only 9 games while losing 17, good for 2nd in the league. The problem was his control, as he walked 102 (4th in the league) against 99 strikeouts. The season shown on this card, McMurtry was demoted to Richmond after starting the season 0-3, giving up 36 runs in 45 innings. He righted himself in the minors, going 7-5 with a 3.27 ERA.
In 1986, McMurtry came back up to the majors, where he was ineffective both as a starter and a reliever, going 1-6 with 4.74 ERA. He was then involved in one of the most uninspiring trades of all time, going to the Blue Jays for #45 Damaso Garcia and Luis Leal. Neither McMurtry or Leal would ever play a major league game for their respective clubs, and Garcia only hit .117 for the Braves.
McMurtry was released during the 1987 off season and was signed by the Rangers. He pitched a good chunk of 1988 with the Rangers, where he posted the best ERA of his career with a 2.25 mark over 60-plus innings of relief work. In 1989 and 1990, McMurtry struggled again, shuttling back and forth between Oklahoma City and Dallas. His control problems returned: he walked 30 (with only 14 strikeouts) in 1990.
McMurtry disappeared into AAA for the next three seasons before resurfacing one last time with the Astros, where a 7.74 ERA signaled his future as a player was to be brief. 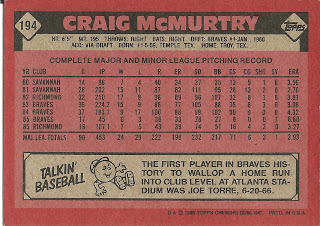 Rear guard: People sometimes forget that Joe Torre is the rare managerial great who was also a star player. Fulton County Stadium was called "Atlanta Stadium" until 1976. The club level seats were well over 400 feet from home plate. Torre also hit the first home run of any kind at the stadium that season. Here's his 1967 card. Check out those straight eyebrows!
This date in baseball history: I attend my first ever opening day game in person. I'm leaving by bike right after this post to go freeze in the upper deck at Wrigley. Go Cubs!
Posted by Jets Break Jaws at 11:51 AM