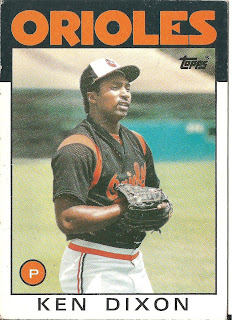 Card thoughts: I really hate those orange rings in the Orioles warm up jackets. They make Dixon look like an extra in a Lost in Space episode. This is Dixon’s rookie card.
The player:  Dixon was a promising young pitcher who succumbed to a mysterious shoulder ailment early in his career. Of course, his nickname was also “Dr. Longball,” so his effectiveness was suspect even before the injury.
Dixon really got the Orioles attention in 1984 in AA when he won 16 games and completed all but 9 of his 29 starts. After a cup of coffee that season, Dixon was used as a swing man the season shown on this card. He was fairly effective in both roles, with his lowest ERA at 3.67 and an 8 and 4 record. Dixon was put into the rotation full time in 1986, and despite giving up 33 home runs, he kept the Orioles in most games. His ERA went up bu almost a run and he went 11 and 13. The next season was much worse for Dixon as he was bounced from the rotation after pitching ineffectively. He had a 8-10 win-loss record and an astronomically high 6.43 ERA.
The Orioles traded him after the season to the Mariners for #152 Mike Morgan, but Dixon appeared in spring training with significantly lower velocity, and they released him. It took three years, but calcium deposits on Dixon’s shoulder were the culprit. Famed orthopedic surgeon Dr. James Andrews used his surgery as a test case. Dixon attempted a comeback in 1989, but it didn’t take, especially after he was suspended for refusing to take (or failing) a drug test. He did attempt to become a replacement player during the 1994-1995 players strike by attending the Phillies' spring training camp.
Apparently, the early exit from the game broke Dixon’s heart. And he got in trouble with the law after retirement, including being busted for cocaine possession and accused of stealing a teammate’s traveler's checks. Dixon has now cleaned up, and enthusiastically signs autographs before Orioles games, as well as running a foundation to serve inner-city kids. 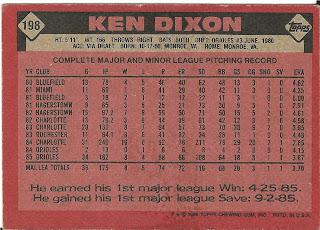 Rear guard: Dixon's first major league win came against the Indians. He pitched a complete game, only giving up 1 run on three hits, striking out 6 and walking only 2. Dixon didn't give up the run until the 9th inning, on #59 Andre Thorton's groundout to third.
This date in baseball history: Perhaps hitting the most famous home run in Cubs history, Dave "King Kong" Kingman hits a home run in 1976 that lands 530 feet away from home plate, hitting a house on Kenmore Avenue on the fly.
Posted by Jets Break Jaws at 6:37 PM