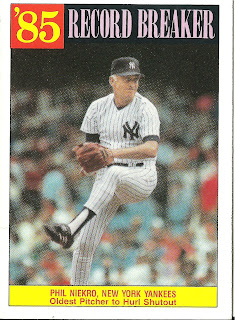 Card thoughts: No doubt, Niekro is about to throw a knuckler.

The record: That shutout was Niekro's last. 1985 would be his last season with a winning record as well. 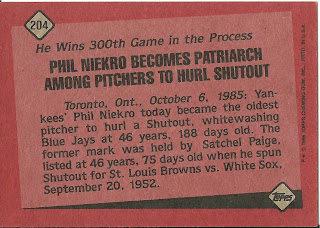 Rear guard: Satchel Paige was so old because he had to play in the Negro Leagues for so long. The year he set the record, he was used mostly as a reliever. Niekro's record breaking shutout was on the final day of the season. He walked 3 and struck out 5. Niekro would end up pitching until he was 48.
Posted by Jets Break Jaws at 8:53 PM