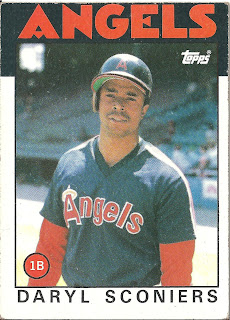 Card thoughts: I never liked this card. Sconiers’ face, with that wispy mustache, always looked to me to be half finished, somewhat ethereal. This is Sconiers’ last card.
The player: People forget sometimes how integral cocaine use was in the upper echelons of our society in the early 80s. Baseball was not unaffected by this tend, and Daryl Sconiers was one of its victims.
Sconiers was a hitting machine in the minors, winning a batting title in the Texas League (.370) and hitting .354 in the Pacific Coat League in 1981. After hitting over .300 yet again the next year at AAA (interspersed with a knee injury), Sconiers was brought up to the big club and hit .154 in limited action.
Unfortunately, future hall of famer Rod Carew was blocking Sconiers at first, so he took on a utility role for the 1983 season. He hit well, hitting 8 home runs and 46 runs batted in in only 314 at bats. Sconiers had a good chance in 1984 to get more playing time, as Carew was aging fast. But he hurt his back, and only made it into 46 games.
Sconiers was AWOL from much of spring training in 1985. Even his agent couldn’t find him. Apparently, he was on a cocaine binge. Eventually, Sconiers appeared in camp, and entered a substance abuse program. He did play that season, but only got into 44 games while hitting .286. Sconiers season was shortened by drug abuse and injuries once again to his back and knees.
This would be the last look Sconiers would get in the majors, although he continued on in the minors until 1991, in the Angels and White Sox systems, at one point even playing with an independent team in A-ball (the same team fellow suspected drug abuser #158 Derrel Thomas left in a huff) . Even while in the minors, he found it hard to keep out of trouble. He was arrested in connection with an armed robbery in his hometown of San Bernardino, California in 1988 while with the White Sox AAA club.
Reportedly, Sconiers never was able to completely kick his cocaine addiction and is homeless on the streets of his hometown. 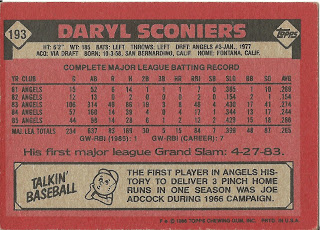 Rear guard: This was no doubt Sconiers' last grand slam. His "first" slam came against the Tigers' reliever Bob James and drove in #62 Bob Boone, Juan Beniquez, and Rod Carew. #55 Fred Lynn also hit a grand slam in this game, where the Angels won 13-3.
This date in baseball history: In 1985, the League Championship Series is agreed to be extended to 7 games for the first time.
Posted by Jets Break Jaws at 8:00 PM