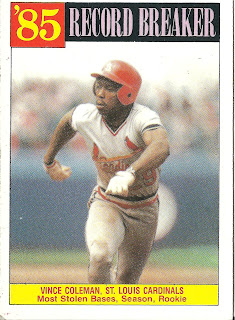 Card thoughts: Coleman is not stealing a base in this picture. He's following the ball as he runs to third. As usual with the Record Breaker cards, the photo is more interesting than the base card.

The record: This is going to be a record that stand for a long time, perhaps the rest of my life. With the gradual elimination of artificial turf, it's tougher for players, even greatest base stealers, to get the great jumps they used to back in the 1980s. Generally, you can lead the league with about 60 or 70 steals these days. 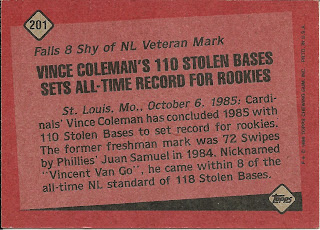 Rear guard: Vincent Van Go is one of the all time most terrible nicknames. It is worth noting that Coleman only broke a one year old record--but did it by 38 steals.The all time season stolen base record is held by Hugh Nicol of the Cincinatti Red Stockings of the old American Association. He stole 138 bases in 1887.

This date in baseball history: In one of the all time futile pitching performances, 4 Kansas City A's pitchers gave up 11 runs in one inning to the White Sox while only allowing one hit. 2 errors, 10 walks, and one hits batsman were the culprit. An incredible 8 runs scored after being walked in.
Posted by Jets Break Jaws at 10:47 PM