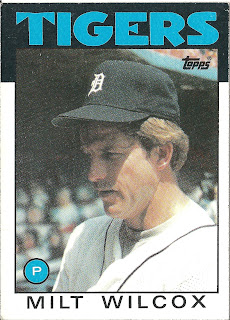 Card thoughts: Milt Wilcox: tortured mound artist, in a downbeat pose, no doubt contemplating the perfidy of Rogozhin, Nastasya, and Ganya in The Idiot.

The player: Wilcox found early success as a member of the Reds, spent years as a hard-throwing, ineffective pitcher, and finally became a good pitcher in his 30s as result, ironically, or his arm troubles. His out pitch was a devastating forkball, but many said that he became a better pitcher after learning the spitter from Gaylord Perry. But Wilcox owed most of his career success to his stubbornness and determination, as well as his propensity to brush back batters. Wilcox was also suspicious—he always threw the same 8 warm-up tosses and ate blueberry pancakes the day before a start.
Wilcox initially made his mark with the Reds. Arriving in Cincinatti at the tender age of 20, Wilcox went 3-1 with a 2.42 Era to close out the season. In the playoffs, he became the youngest pitcher to ever win a post season game, defeating the Pirates in a three inning relief appearance of Tony Cloninger. He was not as lucky in the World Series, when he took a loss to the Orioles, when he gave up two runs in the fifth inning in the second game. Wilcox was back the next season, but he clashed with manager Sparky Anderson and catcher Johnny Bench over pitching style, as so was shipped off to the lowly Cleveland Indians for Ted Uhlaender.
With the Indians, he was made a full time starter for the first time, but he didn’t take well to it, posting records of 7-14 and 8-10 in his first two seasons with the team. Wilcox hurt his arm in the latter season, which caused his velocity to drop. The Indians were unwilling to trust him any longer in the rotation, so he was banished to the bullpen in 1974, where he pitched marginally better.
Now a sore-armed, ineffectual pitcher, Wilcox was unceremoniously shipped to the Cubs for Brock Davis (a 30-year-old minor leaguer) and closer Dave LaRoche, who was really good for the Indians. Wilcox was reduced to a mop up role, and was sent to the minors on a “deal” with manager Jim Marshall, who promised that he would be back up in six weeks if he “shaped up.” Six weeks elapsed without a call, and Wilcox had to convince the GM to let him come back up. The next season, he wasn’t even that lucky, as he was busted down all the way to AA Wichita as the emergency starter and mop up man. He was thought so little of, he was loaned out to the Tigers AAA club when that team had trouble filling out their starting rotation. The Evansville club eventually traded some old uniforms (!) for Wilcox, and he was now Tigers property.
Wilcox finally learned how to pitch in Detroit. Due to his arm injury, he had to rely on guile rather than power to get pitchers out. He was a much better guile pitcher than power pitcher. Wilcox would begin a string of seasons between 1978 and 1984 where he won more than 10 games and had an above .500 record. In 1981, Wilcox placed in the top 10 in wins with 12. Wilcox almost pitched a perfect game in 1983, but White Sox pinch hitter Jerry Hairston singled just past the outstretched glove of #20 Lou Whitaker. Wilcox, upset, reportedly walked the streets of Chicago all night long. Here’s Ernie Harwell’s call of the final inning.
But his best season was the Tigers 1984 World Series winning season when he went 17-9 with a 4.00 ERA. Wilcox established a record that year by being the first pitcher in baseball history to spend an entire season in the starting rotation without a complete game. This record is now the norm for starters. Wilcox also found time to record some commercials, showing better than usual polish in the spots.
Arm soreness returned to Wilcox during the season shown on this card, and he started only 8 games and won only 1. The Tigers released Wilcox at the end of the season, and he signed with the Mariners. A terrible year followed where he went 0-8 in 13 starts, with a 5.50 ERA. This convinced Wilcox to retire.
In his retirement, Wilcox has won a couple of “air dog” contests, you know those weird tourney’s where dogs jump off a diving board. He even runs his own air dog organization. 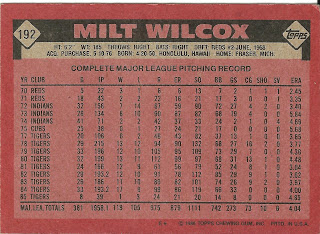 Rear guard: Little did Wilcox know that his solitary win in 1985 would be his last. He lasted only five innings against the Rangers, but didn't give up a run.
This date in baseball history: Mets manager Gil Hodges suffers a fatal heart attack after playing a round of golf in 1972. He will be replaced by another New York baseball legend, Yogi Berra.
Posted by Jets Break Jaws at 10:44 PM

I was an eight-year old die hard fan of the Tigers in '83. That near perfect game was a rare TV game and I remember it well. I had the good fortune of meeting Wilcox a few years back, he seems like a pretty nice guy.
Great touch with the Ernie Harwell audio!

I don't think I ever realized how fast Wilcox disappeared from the game -- in two years he went from a 17-game winner on one of the most storied World Series champs of all time to 1-11 and out of the game.