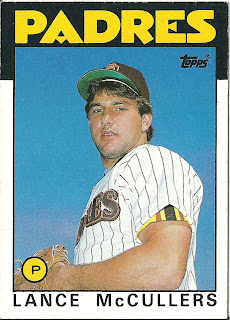 Card thoughts: This card was another that kind of freaked me out as a kid. The angle of the shot looks like McCullers is a big, scary giant. It also makes him look fat (he only weighed 186 lbs on a 6'1" frame). This is McCullers' rookie card.

The player: McCullers was a product of the incredibly fruitful late 70s/early 80s Phillies farm system. He was traded to the Padres late in the 1984 season for outfielder Sixto Lezcano. Nicknamed "Baby Goose" in reference to the Padre closer of the time, Goose Gossage, he had several successful seasons as a reliever for the Padres, with ERAs consistently under 3. McCullers eventually took over the Padres closer role when Gossage was injured and saved 16 games in 1987 and 10 in 1988. In a head scratching move, the Yankees apparently were so impressed that they traded star first baseman Jack Clark to the Padres to get him. He was not successful in New York and eventually he moved on to the Tigers and Rangers before retiring in 1992. 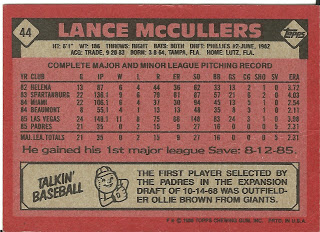 Rear guard: McCullers first save was in relief of Mark Thurmond against the Reds. He pitched 2 2/3 innings and walked one and struck out one to finish a 2-0 shutout.

Ollie Brown was one of the early stars of the Padres. In their inaugural season he led the team in runs, hits, and batting average. So they made a good first choice, considering with the Giants he was never more than a part-time player.
Posted by Jets Break Jaws at 11:33 AM