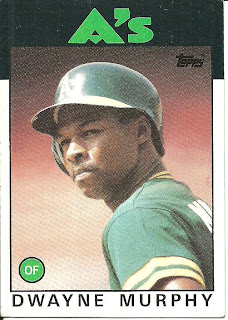 Card fact: Murphy is nearing the end of his career at this point. I'm going start keeping a tally of photo types: Head shot, action shot, candid, or posed shot. So far, the tally is 1 action, 1 candid.

Card thoughts: This is one of the many cool candid shots in this set. I can't think of why Murphy would be looking back at the camera like this. Perhaps he's on deck?

The player: Dwayne Murphy was a great number 2 hitter, often hitting behind Rickey Henderson early in his career (hence the high RBI totals for a number 2 hitter). He hit a lot of homers, but not a lot of doubles and triples. Which is surprising, given the dimensions of the Oakland Coliseum and the fact that he had really good speed.

Other than as great protection for Rickey Henderson (who uncharacteristically gave him a lot of credit for his record breaking 130 steals in 1982), Murphy was known for his glove. He had won six consecutive gold gloves for his center field work including this season. His hat often fell off when making great catches. Probably should have gotten a better fitting hat!

In the last few years, Murphy has coached for the Arizona Diamondbacks and the Toronto Blue Jays. 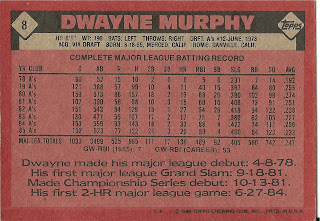 Rear guard: Topps kind of got lazy on the facts. This is just a list of firsts and dates. Show some human interest! You can see by these stats that Murphy also walked a lot, also a good trait for a number 2 hitter. He never really hit for a high average though.
Posted by Jets Break Jaws at 7:20 PM