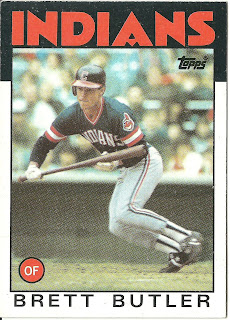 Card thoughts: I love cards that show what a hitter does best. In his 17 years in the big leagues, Butler had 147 sacrifice hits and was considered one of the best bunters in the game.

The player: Brett Butler once summed up leading off this way: You can't eat a meal, unless someone sets the table. He's also a study in perseverance. In high school, Butler didn't even make varsity, and rode the bench. In college, he had to walk on at Arizona State, and even then, the coach didn't remember him when he made the big leagues. But Butler made it to the majors in 1981 with the Braves. In his early days, Butler had speed, but hit almost nothing but singles. He was a good center fielder, though, with good range, and a strong accurate arm, especially for someone with his small size. In 1983, he broke out in a big way, leading the National League in triples, scoring 84 runs, and stealing 39 bases.

But the Braves needed a starting pitcher, and in one of their worst ever trades, they traded Butler, along with #116 Brook Jacoby for washed up #24 Len Barker. Butler scored over 90 runs all four seasons he spent with the Tribe, including 108 in 1984 and 106 in the season shown on this card. When you think of great mid-80s leadoff men in the American League, Butler has to be in the top 3, along with Rickey Henderson and #25 Willie Wilson (the player he most resembles). As Butler became more adept at getting bunt hits, infielders had to play farther in, allowing him to shoot the ball through the infield more easily, and it soon became rare that Butler didn't hit at least .280. His batting eye, which was not good when he came up, improved and he started walking over 90 times a year as well.

All that improvement paid off, when Butler signed a big free agent contract with the Giants after the 1987 season. Butler would have his greatest years in his second tour of the National League. He scored over 100 runs from 1988-1991, leading the league in 1988 and 1991. He also led in hits with 192 in 1990, and walks with 108 in 1991, which was perhaps his greatest season, his first with the Dodgers. Despite all the great seasons, Butler only made an all star team once in his career, in 1991. After that season, Butler had several more productive seasons with the Dodgers (with a brief 90 game sojourn with the Mets), until 1997. He also led the league in triples two more times with 9 (1994 and 1995).

Butler ended his career with a .290 average, over 2,000 hits, 1,000 runs scored, and 558 steals, good for 25th all time. He was also caught stealing 257 times, 3rd all time. Butler, a devout born again Christian, has a great interview where he sums up his career, in the context of his faith. After his playing days were over, Butler managed in the Mets and Diamondbacks minor league system, and coached in the big leagues for them in 2005. He's had some health problems, including a stroke in 2007. But Butler still manages in the minors, currently for Reno, the Diamondbacks AAA club. 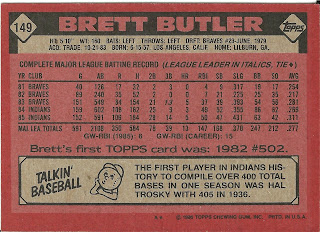 Rear guard: Hey, I have Butler's first Topps card! One of the better future stars cards of that year, as both Butler and Bedrosian were stars at least some of their careers (but not for the Braves). Poor Larry Owen, however, had a .193 career average from 352 career at bats.

Hal Trosky was one of the greatest hitters in the 30s rabbit ball era. Those total bases were made up of 120 singles, 45 doubles, 9 triples, and 42 home runs. He also drove in a league leading 162 runs and hit .343. Sadly, after having 6 monster years, after age 27 he never drove in more than 90 runs or hit better than .300 again (although World War II took 2 seasons from him)
Posted by Jets Break Jaws at 9:55 PM

Brett Butler was one of my favorites.